Heading to the Doctor or Emergency Room? Prepare to Be Prescreened for Ebola 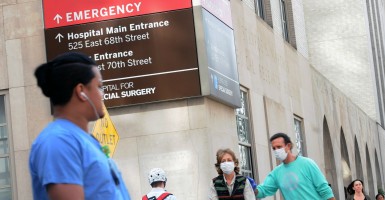 After three patients in the United States tested positive for Ebola–with a fourth diagnosed yesterday–federal health officials stepped up efforts to assist hospitals nationwide. Now, Americans heading to emergency rooms and medical rooms can expect to be prescreened before they even walk through the door.

During a visit Wednesday to a medical center  in Fairfax, Va., journalist John Siniff got a preliminary screening as he approached the front desk.

Siniff had to go to the radiological department to undergo X-rays for an upper-respiratory infection, he told The Daily Signal. Upon approaching the receptionist to check in, she immediately asked him two questions:

Siniff answered, but was curious what would have happened if he replied, “Yes.”

The woman told the journalist she wasn’t sure, as she normally didn’t work in that specific department.

>>> Those Ebola Vaccines in Testing Now? You Can Thank Dick Cheney for That

She had, however, heard that the facility had a “quarantine room.”

Siniff said he waited roughly 15 minutes before going to see a doctor and worried that patients who may exhibit symptoms–and affirmatively answered the receptionist’s questions–would remain in a space filled with others.

“The lack of the gate-keeper at this facility having, really, any sense of what to do, it’s just not a good sign,” he said.

Washington Dulles International Airport, roughly 15 miles from Fairfax, is one of five airports that travelers from West Africa can fly into. The other international airports are Chicago O’Hare, John F. Kennedy, Hartsfield-Jackson Atlanta and Newark Liberty.

Travelers arriving at any of the five airports from Sierra Leone, Liberia or Guinea undergo enhanced screening by Customs and Border Control and the Centers for Disease Control and Prevention.

Because Dulles is a port of entry from countries confronting an Ebola outbreak, Siniff said the lack of direction from the Virginia facility’s employee was concerning.

“This is one of the five jurisdictions where people from West Africa can still fly into Dulles, and God forbid if they have [Ebola] and go to a facility like this and are met at the gateway, they have no idea what to do,” he said. “They still don’t. It doesn’t seem like there’s a responsible adult in the room in these cases.”

Craig Spencer, a physician with the organization Doctors Without Borders, tested positive for Ebola yesterday at New York’s Bellevue Hospital Center and was admitted. He had returned to the United States last week from Guinea, where he was helping treat Ebola patients.

In New Jersey earlier this week, a passenger who landed at Newark Airport was treated for possible Ebola symptoms, but ultimately did not have the disease.

A health care worker who worked with Ebola patients in West Africa also arrived at Newark today. The woman did not exhibit any symptoms, but will be monitored.

At Reston Hospital Center, six miles from Washington Dulles, visitors to the emergency room are siphoned through one designated set of doors before being stopped by a security guard prior to crossing the threshold into the hospital. In a visit to Reston’s emergency room Thursday, a reporter for The Daily Signal and other visitors were greeted with large red stop signs instructing them to halt before moving through electric doors into the ER.

Inside the doors sat a security guard who echoed the instructions on the signs, telling the reporter not to enter. She then asked two questions:

>>> A Doctor’s Take: How Medical Professionals Can Take the Lead on Ebola

After answering no to both inquiries, the reporter asked the security guard why she had asked about travel outside the United States.

“It’s a preliminary screening before people enter the building,” she said.

In a document provided to The Daily Signal, Walter Zolkiwsky, chief medical officer for Hospital Corporation of America Northern Virginia, details precautions taken by Reston Hospital Center and other HCA affiliates to prevent the spread of Ebola.

Zolkiwsky describes practices in place to identify and manage potential cases, including “a screening tool to document contagious illnesses combined with recent travel outside the U.S.”

The guidelines do not detail specific emergency room procedures, including preliminary screening for visitors before they enter the building.

The Daily Signal received no response to repeated requests to Reston Hospital Center for more information about ER practices. Those questions included what the hospital would do should someone say they recently traveled outside the country, and why the screening took place at the door.

The Centers for Disease Control also did not respond to requests for comment.

Thomas Eric Duncan, a man visiting from Liberia was diagnosed belatedly with Ebola and admitted to a Dallas hospital earlier this month,  in what was the first known case of Ebola in the United States. Duncan later died and two nurses involved in caring for him tested positive for the disease and were treated. One, Nina Pham, was released today.

>>> From Africa to the US: Ebola in One Timeline

An advisory from the agency Oct. 1 detailed screening criteria for outpatient and emergency room registration. The CDC advised facilities to be aware of patients who traveled to West Africa within 21 days and have a fever higher than 101.5 degrees.

The CDC instructs staff to move a patient satisfying those criteria to a private room and notify local and state health authorities as well as the federal agency.

“Even though you can’t contract the disease simply by sitting in the same room with an infected patient, if you’re going to screen, it makes sense to be screening people before they have contact with anyone else,” John O’Shea, a general surgeon and Heritage Foundation visiting fellow in health policy studies told The Daily Signal. “It’s a preventive measure that has no real downside and patients should feel reassured rather than inconvenienced.”

In the Washington area, patients and visitors appear to be being prescreened before they check into a medical facility. But in Texas, The New York Times reported, doctor’s offices screen patients on the phone before they arrive–advice not from the CDC but the Texas Medical Association.

“Most of the information that has been disseminated is about containment at a hospital, but what we’re going to see in most cases is someone showing up in a physician’s office first, and physicians’ offices don’t have the equipment necessary,” Matthew Katz, executive vice president of the Connecticut State Medical Society told the newspaper.

The New York City Department of Health and Mental Hygiene advises health care providers and outpatient facilities to ask patients whether  they have exhibited symptoms of Ebola, including a fever, and to detail their recent travel history. The city agency also provides a poster to display at triage stations and entrances for use in prescreening patients. >>> How Doctors and Nurses Suit Up to Fight Ebola, in One Video