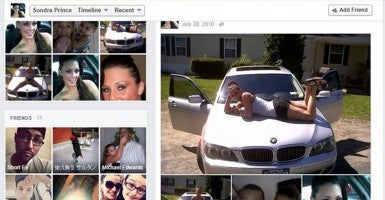 A woman is suing the Drug Enforcement Administration after an agent copied pictures from her cellphone in order to create a fake Facebook profile in her name–all without her knowledge or consent.

Sondra Arquiett, the plaintiff in the suit, was arrested in 2010 on charges of possession with intent to distribute cocaine. Law enforcement officials alleged she was part of a drug ring that included her then-boyfriend. The single mother eventually pled guilty and was sentenced to time served plus a period of home confinement. As part of her cooperation with officials, she allowed them to search her phone for evidence relating to the original offense for which she was charged.

What she did not expect, however, was that Drug Enforcement Administration Special Agent Timothy Sinnigen would copy the pictures on her cell phone and use them to create a phony social media account. The profile was set up in the name of Sondra Prince—Arquiett’s former surname—and Sinnigen regularly used the phony account to post status updates, pictures and add friends—all in the hope of luring in other members of the drug ring.

One picture the fake profile displayed was an image of Arquiett holding her two young children. Another showed her posing in a suggestive manner on the hood of a vehicle with the caption, “At least I still have this car!”

In a court filing, the government defended Sinnigen’s decision to create a fake profile without Arquiett’s knowledge, stating:

Defendants admit that Plaintiff did not give express permission for the use of photographs contained on her phone on an undercover Facebook page, but state the Plaintiff implicitly consented by granting access to the information stored in her cell phone and by consenting to the use of that information to aid in an ongoing criminal investigations [sic].

While the decision to create a phony Facebook account may seem strange, it is not uncommon for police.

Just as police officers often pretend to be someone they are not when acting in an undercover capacity, many police department nationwide have used the tactic of creating accounts of fictional people to interact with others or observe criminal behavior. Indeed, the Justice Department released a social media guide for law enforcement officials that encourages this practice, although there is no indication that taking photos of real person without their consent is allowed.

Officers follow crew members on Twitter and Instagram, or friend them on Facebook, pretending to be young women to get around privacy settings that limit what can be seen. They listen to the lyrical taunts of local rap artists, some affiliated with crews, and watch YouTube for clues to past trouble and future conflicts.

But this most recent case raises new questions about the legality of impersonating an identity–even if it aids in law enforcement investigations. How many other accounts exist without the person’s knowledge or consent to support “ongoing criminal investigations”?

At the very least, this practice violates Facebook’s terms of service. According to Facebook, users must agree not to “provide any false personal information on Facebook, or create an account for anyone other than yourself without permission.” The Drug Enforcement Administration clearly violated the terms of service by setting up an account without the permission from Arquiett. Facebook has since deleted the profile, telling BuzzFeed, “We removed the profile because it violates our community standards.”

Perhaps more troubling is the government’s rationale for why they believe Arquiett consented to this behavior. The Justice Department claimed that by simply granting access to her phone, she also gave them permission to use the information obtained in any manner possible to support “ongoing criminal investigations.”

If this rationale were extended in others areas, could agents who search a house with the homeowner’s consent then steal items inside for whatever purpose they saw fit? Or could a driver’s permission to search an automobile also grant “permission” for officers to siphon the gasoline to power police cars? The Fourth Amendment protects “against unreasonable searches and seizures,” and would equally prevent the government from impersonating you on social media without your consent.

Then there is the double standard being used in favor of the government and against the average person. If a private citizen engaged in this behavior, he or she would be arrested and sent to jail, as has happened on several occasions.

These private citizens were all arrested for engaging in virtually the same behavior as the Drug Enforcement Administration. Shouldn’t the government be held to the same standard?

To be sure, police routinely use covert measures in order to apprehend criminals. Undercover operators work with criminals, break the speed limit to catch a fleeing suspect, or buy, transport or possess illegal drugs. Society allows these actions in recognition of their necessity to aid the police in their duties. It is quite a different matter, however, when law enforcement exceeds these boundaries and stretches the notion of implied consent into an absurd result.

No one impliedly consents that items found during a search of a car, home or person will be used in any manner the government wishes. Nor does one impliedly consent to be put in danger or to have his reputation besmirched by whatever the police choose to do with one’s property.

Stealing the identity of a woman without her consent or knowledge goes far beyond the standard of acceptable behavior for law enforcement.

The Drug Enforcement Administration’s conduct here takes an inch and makes it a mile.