Would a Travel Ban Stop the Spread of Ebola? 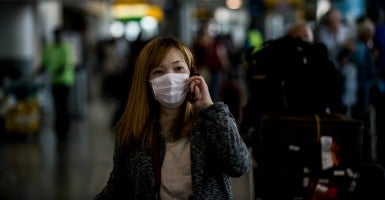 The nation’s top public health official told a House of Representatives panel today that the Obama administration has not ruled out restricting travel to and from West Africa to help keep Americans safe from Ebola.

“We will consider any options to better protect Americans,” says @DrFriedenCDC.

“We will consider any options to better protect Americans,” Thomas Frieden, director of the Centers for Disease Control and Prevention, said in response to a question from Rep. Tim Murphy, R-Pa., who chaired the hearing.

Frieden’s comments came as a growing number of Republicans are calling for a travel ban.

On Wednesday, House Speaker John Boehner, R-Ohio, became the highest-ranking lawmaker to do so, writing in a statement that “a temporary ban on travel to the United States from countries afflicted with the virus is something that the president should absolutely consider.” Besides Boehner, other high-profile Republicans have already called for travel bans or  temporary restrictions. They include Sens. Ted Cruz of Texas, Marco Rubio of Florida and Rand Paul of Kentucky, and Louisiana Gov. Bobby Jindal.

Rep. Dennis Ross, R-Fla., today drafted the Contain Ebola and Stop the Epidemic (CEASE) Act, which restricts commercial flights to and from countries facing an Ebola outbreak. The ban would remain in place until the virus no longer poses a threat.

“Lawmakers are understandably looking for ways to reassure a shaken American public,” said Dan Holler, Heritage Action’s communications director. “Heritage Action is not standing in the way of that effort, but we believe the focus needs to be on the Obama administration’s response. The president and his team needs to be doing everything possible to prevent the spread of Ebola.”

The White House continues to resist a flight ban, arguing it would make it harder to deliver relief supplies to Guinea, Liberia and Sierra Leone, the three countries bearing the brunt of the Ebola outbreak.

Health officials say the U.S. government should focus its resources on West Africa because preventing the spread of the virus requires stopping Ebola at its source.

“Decisions to ban or limit travel should be based on their merit,” says @JJCarafano.

That’s a point echoed by James Carafano, vice president of foreign and defense policy at The Heritage Foundation and E.W. Richardson fellow.

“The most critical task is preventing an outbreak in the United States and helping stem the expansion of outbreaks in West Africa,” Carafano told The Daily Signal. “These are the essential steps that our government should be focusing on to diminish the threat of this deadly disease. Focusing on these efforts puts first things first.

“Decisions to ban or limit travel should be based on their merit,” he added, “but regardless they will not be the decisive steps in dealing with the danger of disease outbreak in the United States.” Today, the White House offered another reason for not restricting travel, saying in a statement that a ban provides “direct incentive for individuals seeking to travel to the U.S. to go underground and to seek to evade screening.”

Late Thursday, in remarks to the press pool after a meeting with health leaders to discuss Ebola, Obama said he does not have a “philosophical objection” to a travel ban, but experts tell him it’s less effective than passenger screening.

Obama said he might need to appoint an Ebola czar or single point person to lead the federal response.

Last week, the U.S. government announced a new airport screening procedure for incoming travelers from West Africa. Passengers arriving from Guinea, Liberia and Sierra Leone to five U.S. airports will now be questioned about potential Ebola exposure and have their temperatures checked.

The administration has said its screening at John F. Kennedy, Newark, Washington Dulles, O’Hare and Hartsfield-Jackson international airports would reach 94 percent of people who are arriving in the United States from the West African countries.

Exit screening has already been occurring in West Africa since the summer.

Liberian visitor Thomas Duncan, who last week became the first person to die of Ebola in America, made it past such a screening.

Two nurses who treated Duncan at Texas Health Presbyterian Hospital in Dallas have since been diagnosed with Ebola.