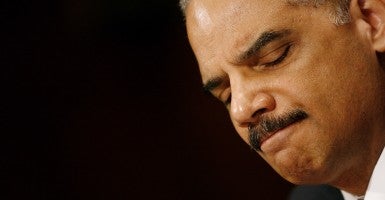 Thirty members of Congress demanded today that the Department of Justice launch an “immediate investigation” into the agency’s own Operation Choke Point and those involved in creating and implementing the initiative against enterprises that are out of favor with the Obama administration.

“This situation merits your full and immediate attention, and we request that you launch a comprehensive investigation on Operation Choke Point and the individuals charged with creating and carrying out this unprecedented initiative,” Luetkemeyer and the 29 other lawmakers write.

‘There is no doubt in my mind that [Justice Department] officials have abused their authority.’ [email protected]

The House members want a response to their request for an investigation by Nov. 12.

“There is no doubt in my mind that [Justice Department] officials have abused their authority to address consumer fraud issues while misleading business owners by claiming financial institutions have not suffered any actual losses,” Luetkemeyer said in a press release.

The senators wrote Holder Oct. 6 that Operation Choke Point “is inappropriately targeting business models not supported by the administration and is politicizing the payment system and access to credit markets.” They added:

The result is causing banks and payment processors to deny or terminate loans and restrict access to payment systems for law-abiding and legitimate businesses to avoid unwarranted investigations and legal actions by the Department of Justice  … and federal financial regulators.

Signing the letter were Sens. Mike Crapo of Idaho, David Vitter of Louisiana, Mike Johanns of Nebraska, Jerry Moran of Kansas, Tom Coburn of Oklahoma and Dean Heller of Nevada.

They requested the following information by Nov. 2:

Four days after the senators wrote Holder, an editorial in  The New York Times inaccurately described Operation Choke Point while defending the controversial actions taken by the Justice Department and federal regulators against politically disfavored industries.

“Lobbyists have tried to confuse the issue by accusing the government of unfairly targeting legal businesses and excluding them from the banking system without cause,” the editorial said. “But Operation Choke Point is directed at banks and third-party processors who flout the law. The regulators need to keep driving that point home.”

Earlier this year, however, the House Oversight and Government Reform Committee found that a mix of legal and illegal enterprises—including guns and ammunition sellers—were targeted by the Justice Department’s covert operation.

As proof, committee Chairman Darrell Issa, R-Calif., offered a list of businesses that was posted on the website of the Federal Deposit Insurance Corporation’s website, but has since been removed. Here are the letters from House and Senate members: