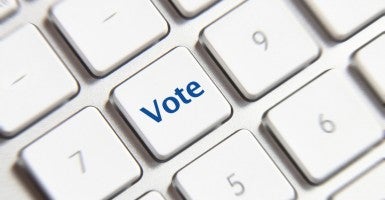 Electronic signatures on voter registration forms from third parties may pose risks, one advocate for fair elections says, but there’s more to be worried about in his state leading up to the Nov. 4 elections.

Herring confirmed a directive issued a year ago by the Virginia Board of Elections under the administration of then-Gov. Bob McDonnell despite concerns about potential identity theft and voter integrity.

Some states, such as Iowa, have allowed e-signatures once technological measures are put in place to ensure information stays private and isn’t used for nefarious purposes.

However, Reagan George, president of the Virginia Voters Alliance, said e-signatures are “just another way to create a fraudulent registration” and only a small part of the overall problem.

Virginia’s voter rolls are bloated, George said, with 44,000 people registered in both Maryland and Virginia.

In Virginia’s Fairfax County, local officials are asking the federal government to prosecute 17 people who voted in both that county and in Maryland in 2012, according to registrar records.

“We could have a bloated roll of about a million inactive voters that are just perfect potential candidates for voter fraud,” George said.