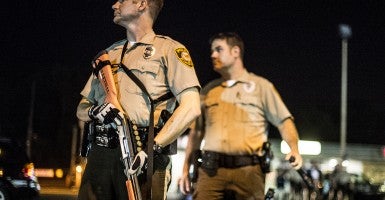 Police during the protests after the Michael Brown shooting. (Photo: Robert Stolarik/Polaris)

The mid-summer clash between unarmed protesters and heavily armed police in Ferguson, Mo., sparked a renewed discussion on the militarization of domestic law enforcement. Critics were quick to lament the ubiquity of armored vehicles and semi-automatic assault weapons at the disposal of officers not just in Ferguson but throughout the nation.

Why has militarization of law enforcement increased? What events inspired these changes?

Opening a discussion into the tactics and weaponry used by our nation’s law enforcement is laudable, but critics all too often fail to inject even a modicum of perspective and context into the conversation. Instead, critics often rely upon specious anecdotes designed to hyper-emotionalize the issue and paint an entire profession as having devolved into a motley crew of adrenalized brutes.

This lack of perspective robs the public of the facts required to make informed decisions concerning the policing practices of their respective law enforcement agencies.

There is no disputing that over the past several decades domestic law enforcement has become more well-armed and the use of paramilitary units such as SWAT teams has increased in frequency. As noted by professor Peter Kraska, SWAT deployments increased by 1,400 percent between 1980 and 2000, and situational awareness and tactical acuity of basic, non-SWAT, patrol officers has been enhanced dramatically as well.

There is little argument militarization of law enforcement has increased. A less-frequently-asked and perhaps more relevant question is: Why? What events inspired these changes?

A Shifting Model of Policing

The focus of domestic policing has changed dramatically over the past few decades. Studies have shown the increased use of SWAT deployments to be consistent with the increased attention placed on the war on drugs that began in earnest in the late 1980s and early 1990s.

Law enforcement’s attention to the scourge of drugs, and the broad array of crimes ancillary to its proliferation, happened in part because the public demanded action against an unprecedented rise in crime.

Beginning in the mid-1960s, crime rates began to soar throughout the United States. This rise in crime affected all regions and demographics and continued steadily throughout the 1970s and ’80s. Between 1973 and 1991, violent crime rose nearly 83 percent, according to data obtained from the FBI’s Uniform Crime Reports.

The demands of a weary public compelled state and local law enforcement to challenge more conventional thoughts on policing. A more targeted, tenacious approach to policing crime hot spots began to take root, and these tactics, because of their inherent danger, often necessitated the use of more specialized police personnel to carry them out.

And in part because of a shifting model of policing, crime rates began to drop dramatically in the 1990s and continue to do so today. In fact, between 1991 and 2001, violent crime fell more than 33 percent.

To be certain, criminological theories abound as to the myriad causes that led to the dramatic decline in crime rates that began in the 1990s. But it is important to understand the events that led to a paradigm shift within law enforcement’s approach to policing crime.

The Evolution of Police Work

Other criticisms, outside of the proliferation of SWAT deployments, also dominate the public discussion on police militarization. These criticisms include the apparent ubiquity of more advanced weaponry and tactics at the disposal of patrol officers conducting the basic functions of police work.

To understand the evolution of police work at the state and local level, it is necessary to recognize the evolving threat dynamic facing domestic law enforcement personnel.

Events such as the North Hollywood shootout, the Columbine school massacre and 9/11 illustrate the extent to which events of exceptional danger frequently fall into the laps of basic, non-SWAT, patrol officers.

Handling a dynamic situation such as an active shooter potentially armed with advanced weaponry necessitates access to comparable weaponry on the part of responding law enforcement personnel. No police officer is morally obligated to place himself or herself in greater danger than a given situation inherently places them.

Such events rarely allow time for the response of specialized, SWAT-type units to neutralize a threat. Instead, the need to end these events quickly requires the immediate interdiction of basic, non-SWAT patrol officers, lest the potential for greater loss of life occur.

Without question, the imagery surrounding the police response to the Ferguson protests drew understandable criticism. But critics should not conflate an arguably inappropriate tactical response in Ferguson with a shifting law enforcement paradigm designed to address 21st century threats. Adequate training and education, from the bottom all the way to the top of a law enforcement organization’s operational hierarchy, is necessary to ensure that weapons and tactics are deployed appropriately and in a manner appropriate to the threat faced.

But it is inappropriate to suggest inhibiting state and local law enforcement from access to the tactics and equipment required to effectively counter growing, and ever-more-dangerous, threats.