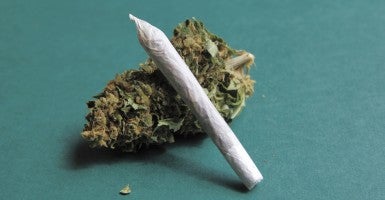 “What the hell—I’ll say it was reckless,” he said on Monday during a debate against Republican challenger Bob Beauprez.

Hickenlooper was referring to Amendment 64, which made Colorado the first state to legalize recreational marijuana in the United States. The law passed in 2012 by a margin of 55 to 43 percent.

>>> Why You Should Be Alarms About Marijuana Legalization, According to Former Obama Drug Adviser

When asked by POLITICO’s debate moderator Manu Raju whether Coloradans were “reckless” to vote Amendment 64 into law, Hickenlooper said yes, citing concerns about the unknown effects of marijuana legalization.

I think for us to do that without having all the data, there is not enough data, and to a certain extent you could say it was reckless. I’m not saying it was reckless because I’ll get quoted everywhere, but if it was up to me, I wouldn’t have done it, right? I opposed it from the very beginning.

Drawing laughs from the audience, Hickenlooper added: “In matter of fact, all right, what the hell — I’ll say it was reckless.”

Hickenlooper’s Republican opponent, Bob Beauprez, agreed with his stance against the substance, although both candidates acknowledged their duty to enforce the voter’s decision.

“When you take an oath to enforce the laws of the state of Colorado, you have to recognize this is one of them, too,” said Beauprez.

Mason Tvert, a key backer of marijuana legalization in Colorado, called Hickenlooper’s comment “politically reckless” in a statement to The Huffington Post:

“Gov. Hickenlooper was elected by 51 percent of the state’s voters, whereas 55 percent approved the marijuana initiative in 2012. Some of them might now be thinking they made a pretty reckless decision when they voted him into office.”

Independent candidate Mike Dunafon is running on a pro-legalization platform in the Rocky Mountain State, but polls show him trailing the two frontrunners with a mere 2 percent.

Hickenlooper and Beauprez remain neck-and-neck, with the Republican holding onto a slight lead.