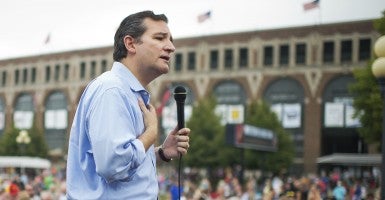 The Supreme Court’s decision to let rulings by lower court judges stand that redefine marriage is both tragic and indefensible.

By refusing to rule if the states can define marriage, the Supreme Court is abdicating its duty to uphold the Constitution. The fact that the Supreme Court justices, without providing any explanation whatsoever, have permitted lower courts to strike down so many state marriage laws is astonishing.

This is judicial activism at its worst. The Constitution entrusts state legislatures, elected by the people, to define marriage consistent with the values and mores of their citizens.  Unelected judges should not be imposing their policy preferences to subvert the considered judgments of democratically elected legislatures.

The Court is making the preposterous assumption that the people of the United States somehow silently redefined marriage in 1868 when they ratified the 14th Amendment.

The Supreme Court is, de facto, applying an extremely broad interpretation to the 14th Amendment without saying a word–an action that is likely to have far-reaching consequences. Because of the Court’s decision today, 11 states will likely now be forced to legalize same-sex marriage: Virginia, Indiana, Wisconsin, Oklahoma, Utah, North Carolina, South Carolina, West Virginia, Kansas, Colorado, and Wyoming. And this action paves the way for laws prohibiting same-sex marriage to be overturned in any state.

It is beyond dispute that when the 14th Amendment was adopted 146 years ago, as a necessary post-Civil War era reform, it was not imagined to also mandate same-sex marriage, but that is what the Supreme Court is implying today. The Court is making the preposterous assumption that the people of the United States somehow silently redefined marriage in 1868 when they ratified the 14th Amendment.

Nothing in the text, logic, structure, or original understanding of the 14th Amendment or any other constitutional provision authorizes judges to redefine marriage for the Nation. It is for the elected representatives of the people to make the laws of marriage, acting on the basis of their own constitutional authority, and protecting it, if necessary, from usurpation by the courts.

Marriage is a question for the states. That is why I have introduced legislation, S. 2024, to protect the authority of state legislatures to define marriage. And that is why, when Congress returns to session, I will be introducing a constitutional amendment to prevent the federal government or the courts from attacking or striking down state marriage laws.

Traditional marriage is an institution whose integrity and vitality are critical to the health of any society. We should remain faithful to our moral heritage and never hesitate to defend it.