Saying ‘No’ to Undocumented Minors Lands Town in Hot Water 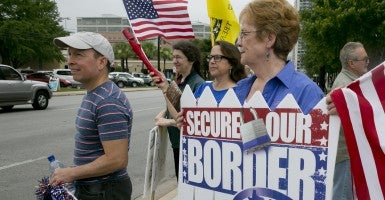 A protest in Texas. A group of around 20 individuals were present to voice their opinion which included anti-illegal immigration, anti-Obama and a few advocating for the innocent children. (Photo: Marjorie Kamys Cotera/Polaris)

One small Virginia town is the target of a racial discrimination complaint from a fair housing group and a shuttered college that would have benefited from a plan to house undocumented minors.

When word broke this summer the federal government—at the original suggestion of Virginia Secretary of Health and Human Resources Bill Hazel and Secretary of Education Anne Holton—was pursuing a contract with the closed St. Paul’s College in Lawrenceville to house what could be hundreds of immigrants, locals made it clear they had serious concerns.

About 1,000 people showed up at a June 19 town hall meeting in the Southern Virginia town of 1,300 to protest.

The federal government consequently backed down and looked elsewhere to house the teens and younger children.

Now, the private St. Paul’s College—which would have received $160,000-per-month to house the youth—and the fair-housing group Home Opportunities Made Equal of Virginia, have filed a housing discrimination complaint with the U.S. Department of Housing and Urban Development against the town of Lawrenceville, surrounding Brunswick County and Brunswick County’s elected sheriff, Brian Roberts.

HOME and St. Paul’s College allege the county, town and sheriff “orchestrated and implemented a plan to block the deal,” the complaint reads. “Purported concerns by these individuals are grounded in false stereotypes about Latinos and reflect discrimination based on race, color, and/or national origin.”

The complaint argues that anyone in the country—not just legal residents—is protected by law.