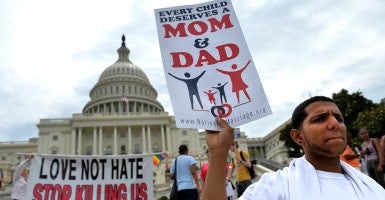 Despite rulings on the Defense of Marriage Act and California’s Proposition 8 from the U.S. Supreme Court last year, traditional marriage supporters are looking ahead to 2015 as a crucial moment in the marriage debate.

Supreme Court justices met for the first time today to consider if they will hear any same-sex marriage cases during the 2014-15 term. The court is faced with seven such lawsuits and has until January to decide whether to hear any of them.

Traditional marriage proponents agree: 2015 could be a defining moment in the debate.

The cases would ultimately decide whether same-sex marriage is legalized nationwide.

The topic was a big draw at the Values Voter Summit in Washington, D.C., on Saturday. Speakers outlined what the future of marriage looks like as the Supreme Court weighs whether or not to wade into the debate once again.

“This attack on marriage is an attack on the family, and it’s designed to remove an impediment to government control of our lives,” said John Eastman, a law professor who is chairman of the National Organization for Marriage. “We have got to stand and fight.” >>> Commentary: How We Can Turn the Tide in the Culture Wars

Referring to Justice Antonin Scalia’s dissent in last year’s landmark case United States v. Windsor, which ruled one section of the Defense of Marriage Act unconstitutional, Eastman issued a call to action to those who support marriage as the union of a man and a woman.

Dubbing the potential fallout from the marriage debate the “Roe v. Wade syndrome,” Eastman noted there is some hesitancy from Supreme Court justices to ‘”constitutionalize a controversial issue,’” as Justice Ruth Bader Ginsburg has expressed before regarding Roe. “That, it seems to me, is extremely encouraging, when you look at what’s going on. We tell the narrative about how this issue is far from settled, and there’s a very good reason for it, and we all know what that reason is,” he said. “We know it in our hearts. We know it in our basic biology classes. Our kids know it from the second grade on.”

“Marriage is a very complicated relationship with the American people right now. It is not won, it is not lost, it is very much up for grabs,” he said. “I believe it is still a winning issue.”

Schubert noted that in a recent Pew poll, support for same-sex marriage dropped 5 percentage points and opposition increased 2 percent, representing the largest shift in public opinion on the issue since 2006. “If we lose before the Supreme Court, that would be the Roe v. Wade of marriage. It would be a very devastating blow, and it will take years, if not decades to recover,” he said.

In the wake of the Supreme Court’s ruling on DOMA, judges in states across the nation began overturning bans on same-sex marriage. But if the Supreme Court rules in favor of marriage as a man-woman union next year, Schubert said, he expects to see several states put marriage amendments before voters in 2016.

This article has been updated.  Seven petitions currently are up for consideration by the Supreme Court.