51 Cents of Every Dollar: How Much Americans Think the Government Wastes 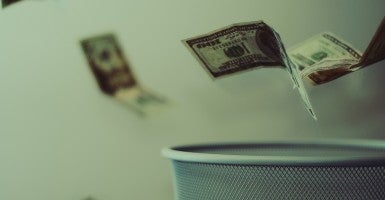 Americans estimate that Washington wastes 51 cents of every dollar it spends, according to a Gallup poll released last week.

The timing could not have been more appropriate. The poll was released just days before Congress and the president agreed on  a stopgap spending measure to fund federal government programs and agencies indiscriminately at the annualized rate of $1.1 trillion. This year’s figure is tied for the highest since Gallup began asking the question in 1979. The 2011 survey, conducted after the $800 billion stimulus bill was enacted, also registered 51 percent.  Except for a low point of 38 percent during Ronald Reagan’s presidency, American perception of government waste has gone the same direction as the size of the federal budget—up. Americans’ estimate of how much the federal government wastes is likely more an expression of a general discontent with operations in Washington than the result of a budget ledger review. Americans are right that government waste goes beyond obvious inefficiency, mismanagement and fraud, and even beyond such boondoggles as the bridge to nowhere or the infamous RoboSquirrel. Economists think of waste as the misallocation of resources from higher-valued activities to lower-valued ones. Waste comes in many sizes and shapes, such as spending on projects that cost more than the benefits they create, or federal funding for functions that are better performed by the private sector or by state and local governments. Last week’s congressional stopgap measure (continuing resolution) funded several wasteful provisions, by extending funding for the 1,582-page omnibus spending bill Congress had passed in January, which included handouts to the energy industry, funding for purely local projects and continued obsolete rural programs. And yet, annual congressional spending bills deal only with about one-third of the federal budget. The remaining two-thirds consist of mandatory spending on health care, retirement, welfare and interest on the debt. Of the more than $100 billion in officially estimated improper payments in 2013, parts of Medicare and Medicaid were among the largest contributors, according to the Government Accountability Office. Medicare and Medicaid reforms should be a top priority for the next Congress. Moreover, a specifically dedicated waste commission could step in where Congress has fallen behind in its oversight responsibilities, consolidating duplicative programs and eliminating inappropriate spending and waste. Ultimately, though, reducing government waste requires reducing the size and scope of government activity. Congress has its work cut out for it.