This One Policy Switch Could Make Gas Way Cheaper 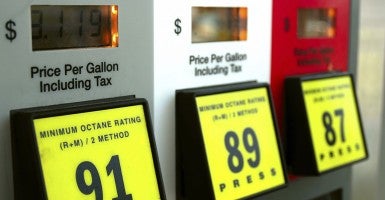 For nearly 40 years, there’s a been a ban on exporting crude oil from the United States to other nations in the world.

Now, a just-released study from a liberal think tank says lifting the ban could boost the U.S. economy between $600 billion to $1.8 trillion and save motorists up to 12 cents a gallon at the pump.

Researchers for the Energy Security Initiative of the Brookings Institution called the ban “an anachronism that has long outlived its utility and now threatens to impair, rather than protect, U.S. energy, economic, and national security” and cites modeling that predicts broad-based economic benefits that include more jobs, better wages and higher gross domestic product if the ban was ended.

The study from Brookings, which is considered a left-of-center think tank, claims the sooner the ban is lifted, the greater the economic impact.

“What is most important is our finding that in all these modeling scenarios, there are positive gains for U.S. households,” the analysis said.

For example, the Brookings study says lifting the ban would increase domestic oil production, which would increase gasoline supply. This, in turn, would lead to a drop of at least nine cents and perhaps as much as 12 cents per gallon over the next five years.

Furthermore, according to the Brookings modeling done by National Economic Research Associates, lifting the export ban reduces unemployment by 200,000 each year between 2015 and 2020.

But more production means more use of hydraulic fracturing, commonly known as “fracking,” and that’s something environmental groups are dead-set against.

“I think the last thing we need to be talking about is exporting fossil fuels,” said Jeremy Nichols, climate and energy program director for WildEarth Guardians. “We’re struggling to try to rein in carbon pollution as a nation … The American people want to see action and are concerned about the costs in increased pollution or a failure to reduce carbon pollution effectively. If we’re talking about exporting oil, we’re just talking about burning it somewhere else.”