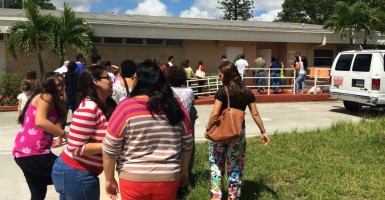 MIAMI — Florida nonprofits have taken in more than 3,000 unaccompanied minors from Central America who illegally crossed the southern border, but those organizations are being paid handsomely by taxpayers for doing so.

The Department of Health and Human Services’ Tracking Accountability in Government Grants System, or TAGGS, reports Florida nonprofits have received $21 million thus far in 2014 to care for the children who came in with a wave of illegals earlier this year.

His House Children’s Home in Miami, a nonprofit providing residential care for abused, abandoned and neglected children, received about $10 million, nearly double what it got last year.

Catholics Charities of the Archdiocese of Miami received more than $4.3 million to care for 300 border children. Millions more went to The Gulf Coast Jewish Family Services Inc. in Pinellas County, Neighbor to Family in Volusia County, Sandy Pines Hospital in Palm Beach County and The Children’s Home Inc. in Hillsborough. For many of those groups, it was the first time they received federal grant money.

The Department of Health and Human Services is required by law to care for unaccompanied immigrant children when there is no parent or legal guardian in the United States.

The federal grants are meant to cover costs for temporary housing, medical care and support services.

But details of exactly how the money is being spent haven’t been easy to come by.

Several, including Catholic Charities, referred questions to the Department of Justice saying “As determined by ORR’s (Office of Refugee and Resettlement) policy, all media requests for any information regarding unaccompanied minors/programs et al in these facilities must be cleared by DOJ,” spokeswoman Mary Ross Agosta said in an email.

Most of the money comes from the “Unaccompanied Alien Children Program,” a program managed by the Department of Health and Human Services, Administration for Children and Families and the Office of Refugee Resettlement.

The Office of Management and Budget, said this fiscal year’s budget is $1.4 billion, and next year’s is $2.28 billion.