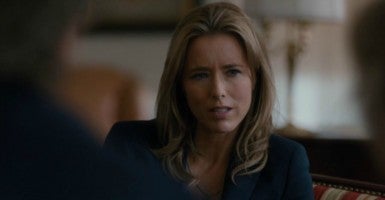 Whether or not you tune in, here are nine facts to brief you on the new “political drama” about power in Washington:

1. Despite taking place largely in Washington, “Madam Secretary” was mostly shot in New York City because the producers got tax incentives. 2. Although the producers say the show drew inspiration from Hillary Clinton’s tenure as secretary of state (and to a lesser extent Madeleine Albright and Condoleezza Rice), they didn’t meet with Clinton or her team before filming. 3. The pilot episode of “Madam Secretary” centers around a hostage situation in Syria. Barbara Hall, executive producer and writer, said she chose Syria because she “thought that’s a place where we’re going to be dealing with troops for a long time.” 4. The second episode, although titled “Another Benghazi,” continues to focus on Syria. Darn. 5. Téa Leoni, who plays Secretary of State Elizabeth McCord, said she drew inspiration for the character from the “strong” women who helped raise her. 6. Tim Daly, who plays the secretary of state’s husband, Henry McCord, said he met former Secretary of State Madeleine Albright at the White House Correspondents Dinner. Albright, he said, is a big fan of his show “Private Practice.” During casting, Morgan Freeman added during the Politico event, he thought Daly looked too young for the part. 8. Hall, second from right above, was a co-executive producer of “Homeland,” the Emmy-winning Showtime drama. She grew up in Chatham, Va., and attended James Madison University in Harrisonburg, Va. 9. Lori McCreary said  she was inspired to create “Madam Secretary” after seeing Hillary Clinton make her “What difference does it make?” remarks before a Senate committee in testimony last year about  the deadly Sept. 11, 2012 terror attacks on U.S. facilities in Benghazi, Libya.

[This article has been modified.]