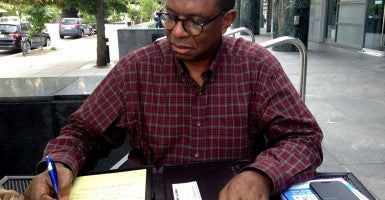 A State Department whistleblower has come forward  to say the details of a former colleague’s account of the sifting of Benghazi-related documents to identify damaging material “ring true.”

The Daily Signal reported Monday on Raymond Maxwell, a former deputy assistant secretary at the State Department who says he observed an unusual after-hours session in a basement operations room of the agency’s headquarters in Washington in October 2012.

Maxwell said a State Department office director told him those present were ordered to separate out any documents related to the Sept. 11, 2012 terrorist attacks on Americans in Benghazi that could prove damaging to then-Secretary of State Hillary Clinton. While he was present, Maxwell said, Clinton Chief of Staff Cheryl Mills and Deputy Chief of Staff Jake Sullivan stopped by.

“Document reviews at State following a significant event are not unheard of,” writes department veteran Peter Van Buren in The American Conservative,  adding that “an affected office needs to recap how it got to where it is.”

Conducting such a review in secret, on a Sunday, with some of the Secretary’s most senior advisors personally overseeing things, is in fact unheard of. The details of Maxwell’s story ring true, the place, the procedures.

In short, he concludes, “I think Ray Maxwell is credible.”

Van Buren, an author and 24-year veteran of the State Department, was himself a whistleblower. He weighs in on Maxwell’s allegations—and the subsequent attempts to discredit him—in a commentary published today.

“People will claim [Maxwell] is nothing more than a disgruntled employee with an agenda. I don’t think that’s true. Because I was once in his place,” Van Buren writes.

Van Buren also addresses efforts to disparage Maxwell and his story by those who point to the fact that he did not go public sooner:

For whistleblowers to go public, there is a calculus of pain and gain, and working it out takes time. You try to go through channels: Congressman Jason Chaffetz [R-Utah] says Maxwell first told lawmakers his full story privately some time ago. Then you wait in hopes the information will come out without you, that someone else might speak up first; you hint at the truth, hoping someone will take the bait, but instead see faux investigations and bleats about ‘it’s just politics’ further bury it.

Van Buren spent a year leading Provincial Reconstruction Teams in Iraq. He blew the whistle on “incompetence and waste of taxpayer money” as well as “near-complete lack of interest by the [State] Department.”

“In my case, I was ignorant of what would happen once I blew the whistle,” Van Buren adds. “Ray Maxwell had examples to learn from. He likely calculated he needed to securely retire from State before taking Team Clinton head-on.”

After he wrote a book exposing what he saw, Van Buren recalls, “my security clearance was pulled; my case was sent to the Department of Justice for prosecution; I was frog-marched out of my office and forbidden to enter any State Department facility; I was placed on a Secret Service watch list as a potential threat to Mrs. Clinton; the pension I earned over a long career was threatened.”

There was a two-year gap between much of what I saw in Iraq and my public coming out. The same was true for [Edward] Snowden and other whistleblowers. You don’t just wake up one morning and decide to turn your own life, and that of your family, upside down, risking financial ruin, public shaming and possibly jail time. It is a process, not an event. You have to wonder what your fate will be once the media grows bored with your story, how far your actions will follow you. Fear travels with you on your journey of conscience.

Mills, Sullivan and Clinton offered no comment on Maxwell’s allegations. The State Department this week did not interview Maxwell to investigate details, and instead responded by saying the Accountability Review Board had unfettered and direct access to State Department people and documents.

Checks of State Department entry and exit records and room use requests should establish the basic facts. Proving what happened at that document review will be much, much harder and will focus in large part on Maxwell’s own credibility.

Is Maxwell a disgruntled employee with an agenda? Possibly, but whistleblowers act on conscience, not revenge; the cost is too high for that, and in this day revenge is available much cheaper via a leak or as an unnamed source. Going public and disgruntlement often coincide but are not necessarily causally connected. Knowing the right thing to do is easier than summoning the courage and aligning one’s life to step up and do it.

I think Ray Maxwell is credible. I don’t think his timing suggests he is not. We’ll see, paraphrasing Clinton’s own words on Benghazi, if it really matters anymore, and what difference it does make.