What the Streets of Scotland Looked Like Before the Big Vote 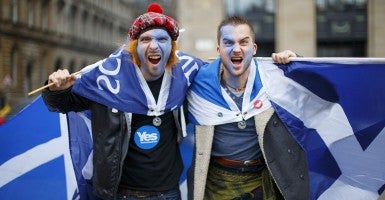 Jesse Stuhr and Stuart Ross Cullen join a "Yes" meeting at George Square in Glasgow whilst people of Scotland going to polling stations to vote on the Scottish independence referendum Thursday. (All photos courtesy of Newscom)

Would Scotland’s future be as part of the United Kingdom or an independent country?

>>> Update: It turns out the answer is “No” to independence. By a decisive 55 percent to 45 percent. And with a huge turnout.

Thursday, the streets of Scotland filled with Scots heading to the polls to cast their “Yes” or “No” vote. They’d campaigned for months, and the polls were neck-and-neck.

According to the New York Times, almost 4.3 million people—97 percent of the electorate—have registered to vote. This includes 16- and 17-year-olds.

Analysts have forecast a turnout in excess of 80 percent at about 2,600 polling places stretching from urban centers to remote and sparsely populated islands and far-flung settlements in the Scottish Highlands. Only residents of Scotland are permitted to vote.

Here’s a glimpse of what Scotland looked like on this monumental day. Windows that line various streets in the Old Town of Edinburgh are covered with “Yes and “No” opinions on independence referendum. Johann Lamont, the Labour leader in Scotland, held a rally for the “Women Voting No” campaign. People gather for a rally in favor of the “No Vote” for Scotland.

>>> Related: 5 Reasons Americans Should Be Nervous About Scottish Independence

Former British Chancellor of the Exchequer and leader of the “Better Together” campaign Alistair Darling with his wife and “No” campaigners before voting outside the polling station at the Church Hill Theatre in Edinburgh, Scotland. A newspaper stand displays a “Yes” or “No” advertisement referring to the Scottish referendum. “Yes” and “No” campaigners at a polling station in Easter Road, Edinburgh. “Yes” and “No” supporters meet in George Square, Glasgow. A Unionist waves the Union flag during a march in a show of solidarity for the United Kingdom in Edinburgh, Scotland. Voters go to the church to cast their ballot at Stockbridge Parish. A lady walks past a building with a large number of “No Vote” posters against Independence on the day Scottish residents vote. A young girl from the “Better Together” campaign stands next to St. James Square with “No Thanks” banners, stickers and placards passing out information on the vote. “Yes” voters and campaigners meeting at George Square in Glasgow. More campaign signs outside of polls. The bakery has been selling special cupcakes with flags of United Kingdom and Scotland for the past month. A child dressed Scottish hat and red wig outside the Scottish Parliament. A “No” supporter campaigns outside a polling station in Edinburgh.