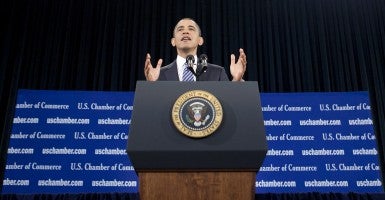 President Obama, a supporter of the Export-Import Bank, speaks at the U.S. Chamber of Commerce in 2011. (Photo: Andrew Harrer/UPI/Newscom)

The Export-Import Bank’s most vocal supporters were among the biggest spenders on lobbying in the second quarter.

According to a report from Politico Influence, the U.S. Chamber of Commerce, Boeing, GE, Business Roundtable and National Association of Manufacturers spent a combined $46.9 million on lobbying in the period between April 1 and June 30.

Despite their attempts to save the Export-Import Bank, its charter expired on June 30 after more than 81 years of existence. Some lawmakers are trying to revive the New Deal program, established by President Franklin D. Roosevelt, as part of the highway bill this month.

Not all of the $46.9 million went to stave off Ex-Im’s expiration, but their collective firepower vaulted them to the front of the pack among spenders in the second quarter.

Here’s list of the top 10 spenders, according to Politico Influence (Ex-Im supporters in bold):

The U.S. Chamber of Commerce maintained its top spot on the list, boosting its spending by more than $4 million from the first quarter, when it spent $13.8 million.

The Chamber is currently running TV ads to drum up support for the bank. According to a video posted on its website, the Chamber claims that the bank “supported 1.3 million American jobs over the past six years”—a claim supporters haven’t been able to back up with empirical evidence.

Ex-Im is sometimes mockingly called “Boeing’s Bank” for the financial support the airline manufacturer has received in subsidies. During the second quarter, Boeing’s lobbying spending skyrocketed, nearly tripling from the previous quarter.

Another big spender, General Electric, dispatched Chairman and CEO Jeff Immelt to Washington, D.C., last month to speak in favor of the bank. He claimed that the bank’s expiration would result in an “economic catastrophe.”

Earlier this year, the Business Roundtable wrote to congressional leaders to support the bank’s reauthorization. The National Association of Manufacturers followed suit last month with another plea to Congress, joined by 1,053 organizations who added their names to a June 3 letter.