5 Reasons Americans Should Be Nervous About Scottish Independence 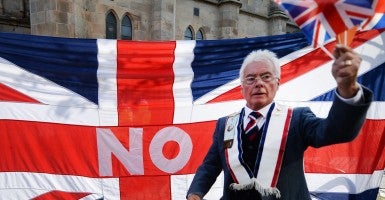 A Unionist waves the Union flag during a march in a show of solidarity for the Union of Britain in Edinburgh, Scotland. Polls are showing that the Yes and No camps are neck and neck in the Scottish Independence referendum. Scots will vote wether Scotland should become an independent country Sept. 18. (Photo: Newscom)

This week’s referendum on Scottish independence has largely flown under the radar here in the United States. The cable news networks have devoted little attention so far to the issue, as the ISIL threat in the Middle East continues to dominate international coverage. There has been no polling conducted on the Scottish question in the U.S., and it is doubtful that many Americans outside of the Washington policy bubble or the financial milieu of New York are particularly exercised by the outcome of a vote taking place more than 3,000 miles away.

They should be concerned. What happens in Scotland will reverberate on this side of the Atlantic, and not for the better. Here are five reasons why Americans should be nervous about the outcome of next week’s vote if Scotland votes for independence.

1. The Special Relationship will be undercut.

The United Kingdom is far and away America’s biggest and most important ally. Anything that weakens Britain, and chips away at the Special Relationship, is a big negative for the United States. This fear has been amply expressed by dozens of members of Congress, both Republican and Democrat, who are backing a resolution in the House of Representatives declaring that a “united, secure, and prosperous United Kingdom” is vital to US interests.

The Special Relationship is too powerful a partnership to be set adrift by a Scottish vote for independence, but there can be no denying it will not be the same without the valuable contribution to the alliance made by Scottish soldiers, sailors, airmen and marines, as well as statesmen, scholars and entrepreneurs, who helped make it the global force it has been for the last seven decades.

2. Britain’s nuclear deterrent will have to be moved

The UK’s entire nuclear deterrent is based in Scotland, and all Britain’s nuclear bases and warheads will have to be moved out of the country, a huge headache not only for London, but also for Washington.  Any threat to Britain’s status as a nuclear power is a matter of great concern for the United States. The NATO alliance originally was conceived as a nuclear alliance, one that has been underpinned since its founding by the American, British and (at times) French nuclear deterrents. Anything that undermines Britain’s position as an independent nuclear power and weakens NATO is a matter of significant concern to the United States.

3. The coalition against ISIL will be weakened

Britain is central to Washington’s strategy of building an international coalition to confront and defeat ISIL, in Iraq and Syria. The timing of the Scottish referendum could not be worse for the White House, which is depending upon Downing Street to help rally countries in Europe and the Anglosphere to contribute militarily to the air war against ISIL. A defeat for the No campaign could dramatically weaken David Cameron’s position, making it harder for him to move forward with British military action, especially if there is a leadership challenge within the Conservative Party. The prime minister’s ability to win a vote in the House of Commons and take Britain to war again in the Middle East undoubtedly would be called into question by defeat in the Scottish referendum.

If Scotland votes for independence, expect significant turmoil not just in the City, but on Wall Street as well. This has been a year of significant volatility in American stock markets, driven in part by events in Europe. Fears over the economic fallout from Scotland breaking off from the UK will spook U.S. markets, frighten investors and add to an air of uncertainty exacerbated in recent months by Russia’s invasion of Ukraine. Add to this the prospect of a Scottish economy set adrift from the pound, with potentially huge costs incurred in transitioning to an independent financial system, and you have every reason to fear more market turbulence.

5. An independent Scotland will be an insignificant ally to the U.S.

As part of the United Kingdom, Scotland is a valuable ally to the United States, home to Britain’s independent nuclear deterrent and submarine bases, as well as several British military regiments. It also is home to important NATO early-warning air defenses, increasingly vital in the face of Russian aggression. As an independent entity, with a projected defense budget of just $2.5 billion, significantly less than the $4.1 billion budget of London’s Metropolitan Police (hat tip: Luke Coffey), and just 15,000 members of the armed forces, Scotland’s role as a U.S. partner would be practically non-existent. Edinburgh would struggle to gain entry to NATO, with countries such as Spain and Italy likely to veto Scottish membership for fear of encouraging nationalist movements within their own borders.

Originally appeared in The Telegraph.