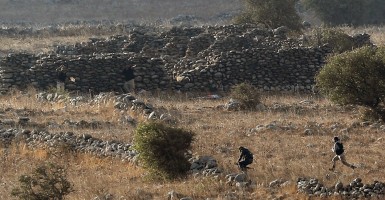 After lengthy debate that aligned Democrats and Republicans on both sides of the argument, the House  today passed an amendment allowing the Obama administration to help Syrian rebels in the fight against the terrorist group ISIS.

Lawmakers voted 273 to 156 this afternoon to authorize the Pentagon to arm and train “moderate” rebels to combat ISIS, also known as the Islamic State or ISIL, exceeding the required 218 votes.

The provision, which will be attached to a continuing resolution to fund the federal government until Dec. 11, bears a $500 million price tag.

“By authorizing the Department of Defense to help train and equip the Syrian opposition, this measure represents an important, initial step forward in taking on the Islamic State of Iraq and the Levant (ISIL),” House Speaker John Boehner said, adding:

ISIL represents a direct threat to the safety and security of the United States, and House Republicans are firmly committed to doing everything we can to help keep America safe. Across the Capitol today, Secretary of State John Kerry ran into skepticism and outright hostility as he testified before the Senate Foreign Relations Committee on the administration’s strategy for taking on the brutal Islamist jihadists.

In an address to the nation last week, President Obama called on Congress to authorize the $500 million as part of his four-pronged plan to “degrade and destroy” ISIS.

The president’s request won Boehner’s approval early on, as the Ohio Republican reassured skeptical colleagues that the rebels known as the Free Syrian Army had been “well-vetted” by intelligence officials.

However, lawmakers and foreign policy experts cast doubt on Boehner’s optimism about the group, which is fighting both ISIS and the regime of Syrian President Bashar al Assad.

Steven Bucci, a top official at the Pentagon during the Bush administration, was among those who spoke to the dangers of giving tens of millions of dollars to the Syrian rebels.

“This part of the president’s plan is highly risky,” Bucci, who oversees defense and foreign policy at The Heritage Foundation, told The Daily Signal. “Many questions remain, and I share the skepticism of many legislators for this aspect of the anti-ISIS effort.”

Speaking on the House floor earlier today, Rep. Tulsi Gabbard, D-Hawaii, expressed discontent with the plan to spend $500 million to arm and train the Syrian fighters.

“This proposed strategy actually reflects a lack of commitment to really destroy ISIL and the other Islamic extremist groups that we’re at war with,” she said.

Gabbard said it would take “way too long” to train the rebels and said there were not enough of them to take on ISIS. The Hawaii Democrat warned that it was impossible to correctly identify the alliances of the “moderate” Syrian rebels, so weapons provided by the United States later could be “used against us.”

“They might be completely honest, but then lose to ISIS or al Nusra, the al-Qaeda affiliate in Syria, and then the radicals have all our well-intentioned aid,” Bucci told The Daily Signal earlier.

A statement from House Minority Leader Nancy Pelosi reflected the view of many fellow Democrats. The Californian said:

The American people understand that ISIS must be stopped. I wish such actions were not necessary, but we must vote to approve the president’s request to help the Syrian people take responsibility for building peace and security in their country, and to stem the threat ISIS poses to the U.S. interests abroad and to our national security.

Over in the Senate, Corker told Kerry: “I do want us to deal with this. [But] you’ve not laid it out in a way that meets the test.”

Similarly, Foreign Relations Chairman Bob Menendez, D-N.J., told Kerry that lawmakers likely would have to pass a new authorization for the use of military force, or AUMF, to address the campaign against ISIS.

“You’ve going to need a new AUMF,” Menendez said, “and it’ll have to be more tailored.”

In coming days, the Senate likely will act on the budget measure including the language on training and arming the Syrian rebels.