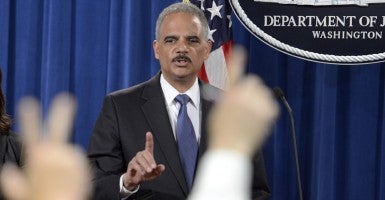 But the latest indication it may be a sham came to light through an embarrassing but highly revealing error made by a senior communications aide to Attorney General Eric Holder. It occurred when that aide mistakenly called the office of Rep. Darrell Issa, R-Calif., chairman of the House Oversight and Government Reform Committee, instead of Elijah Cummings, D-Md., the committee’s top Democrat. He wanted to ask for Cummings’ help in leaking documents related to the IRS scandal.

In May 2013, shortly after the IRS targeting of Tea Party and other conservative organizations was publicly revealed, Attorney General Eric Holder announced a criminal investigation into Lois Lerner and the IRS for behavior he denounced as “outrageous and unacceptable.” Nine months later, attorneys representing dozens of the targeted organizations revealed that none of their clients had been contacted or interviewed by the FBI or the Justice Department. We also learned then that Holder had assigned a Justice Department lawyer in the Civil Rights Division—Barbara Bosserman, a large donor to President Obama—as the lead attorney in the investigation. This despite the obvious appearance of a conflict of interest, as well as her complete inexperience in this type of public corruption investigation. Such investigations normally are handled by the Public Integrity Section of the Criminal Division, not the Civil Rights Division, which is staffed with the most partisan lawyers in the Justice Department.

When Lois Lerner finally was held in contempt by the House of Representatives on May 7, the contempt citation was sent to the Justice Department for action the next day. Under federal law (2 U.S.C. §194), the duty of the U.S. Attorney for the District of Columbia, Ronald C. Machen, Jr., “shall be to bring the matter before” a federal grand jury for action. Under 2 U.S.C. §192, Lerner could be imprisoned “for not less than one month nor more than twelve months” and fined up to $1,000.

It is that type of potential punishment that would provide an incentive for Lerner to finally answer congressional questions about her actions. This is especially true since, arguably, she waived her Fifth Amendment right when she gave the Justice Department a “lengthy statement” about her conduct.

Yet despite the mandatory language of the federal statute, it now has been more than four months since Machen received the contempt citation, and there has been no public statement from Justice that action has been taken on what would be a simple matter to present to a grand jury.

And so we come to the latest clue that DOJ isn’t interested in getting to the bottom of the scandal. It happened on Sept. 5 and was first reported by Breitbart News. Chairman Issa’s committee has been trying to get the Justice Department to help it contact former DOJ lawyer Andrew Strelka, who worked directly for Lois Lerner before he moved to Justice. Despite Strelka’s possible involvement in the IRS scandal, he was one of the lawyers assigned by Justice to defend a lawsuit arising out of the targeting of conservative organizations, Z Street v. Koskinen. In a Sept. 3 letter to Eric Holder, Rep. Jim Jordan, R-Ohio, chairman of an Oversight subcommittee, claimed the Justice Department had “refused to assist the Committee in speaking to Mr. Strelka” and the Justice Department has been trying to “prevent the Committee from learning Mr. Strelka’s whereabouts.” He demanded Holder provide his committee with “Mr. Strelka’s contact information” by Sept. 5.

At 5:01 p.m. on Sept. 5, according to a second letter sent by Rep. Issa to Holder on Sept. 8, a senior official at Justice’s Office of Public Affairs identified by Breitbart as Brian Fallon called Issa’s office “under the mistaken belief he had called the staff of Ranking Member Elijah E. Cummings.”

Fallon said the Justice Department would be shortly providing the committee with a “letter and documents” in response to the inquiries about Andrew Strelka. Fallon wanted to secretly send the letter and documents to Cummings first—before the majority office received it—so Cummings could leak the material to selected reporters to give the Justice Department the opportunity to “comment on it” before the majority “could share it.”

In other words, Fallon wanted Cummings to help him spin whatever embarrassing information was being given to the majority about Strelka and his involvement in the IRS scandal. At some point in the telephone conversation, when he apparently realized who he was talking to, Fallon “abruptly placed the call on hold.” When he came back to the call, he was “audibly shaken,” according to Issa’s letter. When the Justice Department is conducting a serious, non-partisan, criminal investigation, it has no need to spin the release of information—unless it is about a hard-to-find Justice lawyer who was assigned to handle a case despite being a potential witness, a clear conflict of interest warranting disqualification from further involvement in the case or any ongoing investigation.

When the Justice Department is conducting a serious, non-partisan, criminal investigation, it does not assign as the lead lawyer a campaign donor who has no experience in the type of crime being investigated, and who doesn’t even work in the unit normally responsible for investigating public corruption.

When the Justice Department is conducting a serious, non-partisan, criminal investigation, it does not wait a year before it tries to interview the victims, who are the individuals who may have relevant information needed to investigate the perpetrators of the crime.

And when the Justice Department is obligated under federal law to take certain actions, such as refer a contempt charge against the target of an investigation to a federal grand jury, it does not sit on its hands and ignore federal law it is obligated to enforce.

What all of this adds up to is simple. It seems highly improbable the Justice Department is making any effort to conduct a serious, non-partisan criminal investigation of what happened at the IRS.