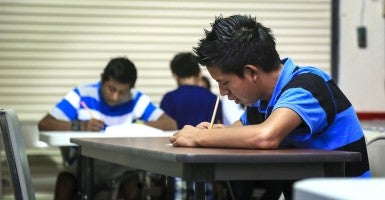 RICHMOND, Va.— Virginia classrooms this school year will include as many as 2,800 new undocumented children, who will cost state taxpayers $54 million.

The cost for school-eligible children who crossed the U.S.-Mexico border and have been released in Virginia—often to extended family members—is among the highest per-capita in the nation, according to the Federation for American Immigration Reform. FAIR, a research group opposed to illegal immigration, said the feds reimburse the state and localities about 10 percent.

In a nutshell, it costs more to educate underprivileged students for whom English is a second language.

“The reason these kids are more expensive to these school districts is because many have limited English skills,” said Bob Dane, communications director for FAIR. “There’s a lot of catch-up; there are a lot of cultural hurdles.”

Gov. Terry McAuliffe—when asked on radio how he will handle undocumented children in regard to jobs and schools—said immigration is a federal issue and, “we don’t have an issue in Virginia.”

For school administrators, teaching children who come to the United States without proper papers isn’t new, as interviews with school officials around the state show. But Dane said that doesn’t mean it’s easy—especially when state and local budgets are already strapped.

The 37,000 unaccompanied children placed by the Department of Homeland Security and Health and Human Services around the country will cost the nation’s taxpayers up to $761 million for the 2014-15 school year, FAIR says.

But a new report from Pew Research Center shows 56 percent of Americans favor allowing undocumented children to attend public schools while they await deportation hearings; 40 percent are opposed and the rest don’t know.