Poverty, Not Climate Change, Bigger Concern for China and India 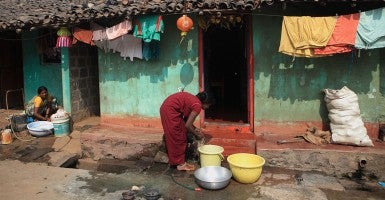 A slum woman in India washes clothes from the tap water in the Slum neighbourhood at Belgaum. [Photo via Newscom]

According to a recent news story, President Xi Jinping of China and Prime Minister Narendra Modi of India will not attend the upcoming UN climate summit. The clear, but unsaid, implication is that the two most populous and still poor countries do not want to attend a bashing of CO2 emitters—of which they are major and growing examples.

It turns out they do not have to attend to be bashed—Tony deBrum, the Marshall lslands’ foreign minister, provided the service in advance and in absentia: “I was completely shocked and very disappointed to read today that Chinese President Xi and Indian Prime Minister Modi may not make it to Ban Ki-moon’s Climate Summit. For the small island states of the world, the science says we might be forced to pay the biggest price of all — the loss of our countries. We expect solidarity from our developing country compatriots, not excuses.”

Poverty is deadly. For instance, snake bites kill nearly 50,000 people per year in India (also see here) because poverty, especially rural poverty, limits access to appropriate medical care. In addition, the availability of refrigeration, needed to preserve many types of anti-venom, is severely restricted in India. A third of India does not even have electricity, let alone refrigeration, and power is intermittent for most who do have it.

The 50,000 snake-bite deaths are almost certainly a small fraction of the morbidity caused by India’s poverty. With these numbers in mind, perhaps it’s worth asking deBrum to tone down the sanctimony.

The Marshall Islands have a population of about 56,000. Those residents can’t be dismissed simply because they live in a small nation. They are as important as any other 56,000 people. But they are not more important than the 56,000 Indians who die every 14.5 months because poverty prevents them from having timely access to anti-venom. Nor are they more important than the hundreds of millions of Indians who suffer other crushing impacts of poverty.

It is a moral imperative for India—and China—to promote their economic growth. The carbon-limiting proposals likely to come out of any UN climate summit would seriously hinder this growth.

The irony of deBrum’s preachy statements that implicitly equate the current, certain, and continuing deaths in India with the speculative impacts of sea-level rise (which appear to be even less of a problem for atolls such as the Marshall Islands) decades or centuries removed is compounded by a glaring statistic. According to World Bank data, the per capita emissions of CO2—the supposed cause of sea-level rise—is 66 percent higher in the Marshall Islands than in India.