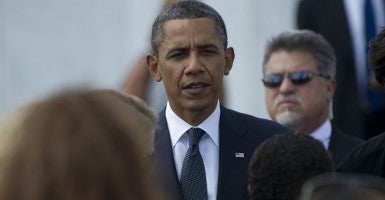 Is it possible to have a debate on border security and immigration reform that doesn’t descend into an unproductive shouting match? Yes. I’ve been involved in many such debates all across the country, and none of them proved contentious.

In each case the discussion started by identifying the points all sides could agree on. Imagine if Washington tried that. Congress and the president could roll up their sleeves and work on the issues everyone knows need to be addressed. Then, with that work behind them, they could settle down and work out their differences on the really intractable issues.

Unfortunately, it’s very unlikely that this White House and this Congress will ever take a sensible approach toward immigration. President Obama has always insisted that a sweeping amnesty for the millions unlawfully present in the United States must come before any other congressional action. He has never backed off that demand.

Obstructionism from the White House has extended to the absurd. Take extending e-Visa status to New Zealand, one of the most innocuous measures waiting before Congress. These visa programs are designed to promote trade and job growth between like-minded free-market partners with the United States. Including New Zealand in the program is more than long overdue.

But no. Even though it’s a simple legislative fix, it’s stalled. Like other common-sense measures — any legislation that advances visa reforms and improves the lawful migration system and sensible border security — it’s backed up like bottlenecked traffic. And all because no measure can move till the president delivers amnesty.

Obama has increasingly been pushing his amnesty agenda without Congress. He started by loosening up enforcement of immigration laws. Then, in 2012, he initiated his Deferred Action for Childhood Arrivals, which implemented an administrative amnesty for minors. Now it’s widely reported that Obama is planning a broader administrative amnesty that could include millions.

The president’s “solution” adds to the problem. It doesn’t solve it. Amnesty only encourages more to seek to enter the U.S. illegally. It does nothing to enhance border security or visa or immigration reforms.

Further undercutting the president’s legitimacy are reports of a series of meetings with pro-amnesty and business groups as a run-up to his proposed amnesty. To many, that smacks of cronyism, buying off or placating special interests. It paints an image of a president intent on pleasing some at the expense of others.

To make matters worse, the president’s actions are riling up Americans. Across the political spectrum, fewer and fewer people feel like Obama is acting in their interests. Even the liberal left is angry, arguing the president’s actions could poison the well for long-term reforms to replace his administrative measures — measures which could be terminated by the next president.

The recent flood of illegal immigrants streaming across the border has sparked outrage among pro-immigration groups. The public’s frustration with the administration’s handling of the issue is actually making lawful immigration less popular. Demands to deport illegal aliens are also becoming more strident.

The intensity of the concern of average citizens is also skyrocketing. A year ago, most Americans thought of immigration as back-burner issue. No more. A new survey by the Polling Company, a Washington-based consulting firm, indicates that more than half of likely voters consider immigration a top-three issue.

Obama’s course is so deeply divisive that even the Oval Office may be wising up a bit. The White House is signaling that it may wait until after the mid-term elections to act, so that congressional candidates in the president’s party won’t suffer a backlash at the ballot box.

If there is a bright side to the current mess, it’s that even as the showdown in Washington gets more acrimonious, the common concerns among people outside the beltway stand out even more starkly.

Americans recognize the need for a more secure border and for more rational and practical immigration policies. They see the need to reduce the backlog of those waiting in line to lawfully immigrate to the United States.

If only the White House started with these concerns, rather than sweeping them aside, then Washington might actually get things done.