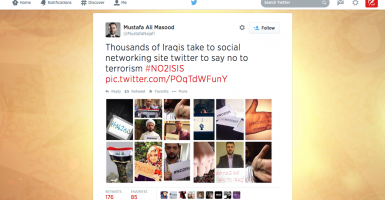 While the U.S. government unbelievably – according to President Obama himself – does not have a strategy for dealing with the threat from ISIS (Islamic State in Iraq and Syria), Iraqis themselves have found a way of countering the propaganda war being waged by this latest terrorist insurgency. In the echo chamber that is the social media sphere, fighting hashtags with hashtags can be hugely effective.

Iraqis are under propaganda assault from Twitter and other social media postings by ISIS, which delights in showing the world its barbaric acts. Ordinary Iraqis, to their enormous credit, however, are refusing to be intimidated, and have been tweeting and retweeting under the hashtag #No2ISIS. This catchy slogan has caught on like wildfire and is showing up not just on the Internet. Muslim demonstrators in London have even been carrying posters with the slogan.

Digital Journal interviewed the man behind the campaign: Sayed Jyiad, the director of policy at the Iraqi Centre for Integration and Cohesion (ICIC). His is seeking to inform the West and to unite Iraqis for a state free of the terrorist scourge. He both a student of ISIS and an Internet entrepreneur.

Among other things, he told Digital Journal in regarding ISIS:

“They will spread rumors that they are attacking a particular area, to cause panic and for people to flee, this is reported by some wire services and unfortunately ISIS then lay in ambush for the people fleeing as happened in Tal Afar on Sunday.They also spread lies and use fake images in order to stoke sectarian tensions and recruit people to their cause. Above all they use social media to display their ‘soft’ and ‘hard’ power to give different images to supporters and enemies.”

In other words, ISIS is using propaganda both as a tactical military tool and as a way of striking terror. But the fact is also is that ISIS is so far beyond the pale that it has has pushed other Muslims into action, and into finding strategies to unite with each other.

Their spirit and determination should be an inspiration and an encouragement to those here in the West, including the U.S. government, to focus on this menace from the Middle East.