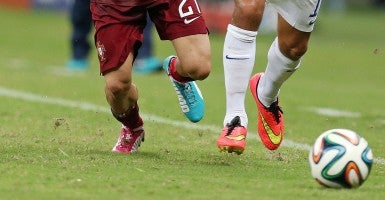 The World Cup is underway, and other than the Olympics, it will surely be the most closely followed sporting event with estimates of more than one billion TV viewers worldwide.

I’ve often argued that in the entire world, the only thing worse than playing soccer is watching it. It’s about as exciting as staring at the clothes dryer for two hours as your shirts and pants tumble around.

Just as in soccer, if you go to get a sandwich or go for a mile walk and then return to the screen, guess what? Nothing has happened.

>>INFOGRAPHIC: Who Would Win the World Cup If Measured by Economic Freedom?

The last soccer match I watched was when the U.S. women played China for the championship and after what seemed like an eternity – consecutive life sentences – the score was zero to zero.That was scintillating. Now let’s really get wild and watch a congressional hearing on CSPAN.

Every soccer match is like watching a North Carolina basketball game before the shot clock when Dean Smith invented the four corner offense.

I’ve often said that after having to watch my three sons play junior soccer, now I know why Europeans riot at soccer matches. For the same reason that inmates riot in prisons: there’s nothing else to do. It’s good exercise for sure, but to what end? If golf is a good walk spoiled, then soccer is a good run spoiled.

And what is with the ugly polyester soccer uniforms?

I’m an American. I want scoring. I want action. Maybe it’s part of the instant gratification culture but 90 minutes of kicking with zero or one or two goals doesn’t exactly move heaven and earth.

And because scoring is such a lightning striking rarity, once a team gets up by two or three goals, turn the lights out, it’s like being down 49-0 in football. In other words, soccer lacks one of the best parts of watching a sport: the comeback. It almost never happens. If a team gets up by three goals they might as well invoke the slaughter rule.

Because scoring is so nearly impossible, many of the matches come down to faking a penalty (flopping) in order to get a penalty kick. The referees are the most important people on the field.So the key to being a good soccer player is to be a really good actor.

I’ve also argued that soccer is a manifestation of the labor theory of value applied to sports—which may explain why socialist European nations do so well.

Soccer is a huge expenditure of human effort and exertion with almost no return. Under capitalism the idea is to produce the most output with the least amount of work. Because there is so little scoring and so little of the action bears on the outcome of the game, every crazed soccer mom can convince their child that they are above average.

Here we are in America, the world’s economic and military superpower, and the richest place on the planet. Yet the odds of America winning the Cup this year are 100-1. We’re like Fairleigh Dickinson going up against Kentucky in the NCAA basketball tournament.

Now basketball, that’s real action. And we are indisputably the world superpower in that sport.

Or let’s have a World Cup tournament in “football” on the gridiron. Given the lousy state of the economy, the ISIS offensives in Iraq, and a White House that seems to be fighting a new scandal every 24 hours, America needs a lift.

The World Cup surely isn’t it – we will leave that to Germany and Brazil.