Q&A: 10 Things You Need to Know About Boehner Suing Obama 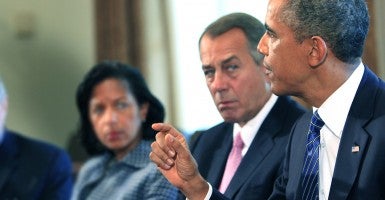 Last week, the House of Representatives voted to authorize Speaker John Boehner to file a lawsuit challenging President Obama’s failure to fully implement Obamacare. Specifically, the lawsuit will challenge the administration’s delay of the employer mandate—requiring many employers to provide health insurance or pay a fine—that was supposed to go into effect Jan. 1. It’s clear President Obama repeatedly has abused executive power to circumvent Congress and essentially rewrite the law, but this lawsuit still raises a host of questions.

1) Can you sue the president?

Yes. Presidents enjoy immunity from lawsuits for civil damages resulting from their official acts, but they are not immune from all lawsuits. For example, the Supreme Court allowed Paula Jones’ suit for sexual harassment against President Clinton to proceed while he was in office. Further, members of Congress have filed dozens of lawsuits against presidents over the years. Most have been unsuccessful, usually because members fail to allege a sufficient injury. Since Boehner’s lawsuit will deal with implementing Obamacare, the suit likely will be brought against Secretary of Health and Human Services Sylvia Burwell and other executive branch officials charged with carrying out the law. It’s possible Obama won’t actually be named in the lawsuit.

2) Who will represent the House in court?

The House’s Office of General Counsel routinely represents the House in legal disputes, such as suits to enforce congressional subpoenas or the Speech and Debate Clause. In the past, the House also has hired outside counsel, such as when the House Bipartisan Legal Advisory Committee hired former Solicitor General Paul Clement to handle the Defense of Marriage Act litigation.

3) How will this lawsuit be funded?

As with past lawsuits, the House will appropriate funds to pay for the litigation. The Committee on House Administration will make public quarterly statements in the Congressional Record detailing expenses.

4) Does the Senate have a role?

The Senate probably is not required to join in the lawsuit. Under the Supreme Court’s precedents, members of Congress have standing to assert personal injuries or direct and concrete institutional injuries. In Coleman v. Miller(1939), the Supreme Court found a group of state senators demonstrated a sufficient institutional injury even though the suit was brought by 26 members of one chamber.

5) Why would the House sue when it has other remedies?

Boehner has determined filing a lawsuit will be the most effective way to rein in the executive branch. Other remedies do exist—mainly appropriations and impeachment—but they require the Senate’s involvement. The House could try to leverage appropriations to encourage the president to faithfully execute the law, but as Boehner has pointed out, the Democratic Senate could refuse to pass such an appropriations bill. Similarly, impeachment requires conviction by two-thirds of the Senate. Although Boehner’s lawsuit may face obstacles, it would not require Senate concurrence.

6) What happens if Obama loses?

Courts routinely enforce statutory mandates, such as the express deadlines in Obamacare that the executive branch has “relaxed.” Concerns the president would ignore the courts likely are unfounded. Even though Obama has complained about his losses, “There is no case in which he completely refused to follow a Supreme Court ruling he lost,” said Todd Gaziano, executive director of the Pacific Legal Foundation’s Washington, D.C., center.

7) What happens if Boehner loses?

Before a court considers the merits of Boehner’s lawsuit, it first must decide whether the House has standing to bring this suit. If a court determines Boehner failed to establish Article III standing (a constitutional requirement for all lawsuits), it would result in dismissal of the case, but it would not mean the court agrees the president acted properly. If the suit is dismissed, it’s possible a private party may file suit, although the lack of private parties is one reason Boehner says his lawsuit is necessary. After members of Congress failed in their challenge to the Line Item Veto Act in Raines v. Byrd in 1997, the Supreme Court struck down the law when the City of New York and a group of private parties challenged it the next year.

Yes, but that is irrelevant to Boehner’s lawsuit. Executive orders are directives issued by the president to run the various parts of the executive branch—ranging from George Washington’s proclamation calling on the militia to put down the Whiskey Rebellion to Harry Truman’s order desegregating the armed forces. Most executive orders throughout our nation’s history are perfectly appropriate and non-controversial. Boehner’s lawsuit does not address Obama’s use of executive orders per se. Instead, the suit will challenge his failure to faithfully execute the law. The American Presidency Project, which has cataloged every executive order, says Bush issued 291 executive orders, Obama has issued 183 to date, and Franklin D. Roosevelt issued the most with more than 3,500.

9) Will this open the floodgates for Congress and the Executive Branch to turn to the courts to resolve their disputes?

No. There have been plenty of lawsuits brought by members of Congress against presidents and other executive branch officials in the past. The Supreme Court has been pretty clear that courts should not entertain “sore loser” suits where members of Congress sue over a vote they lost. This suit will not change the judiciary’s reluctance to get involved in political disputes between the other branches of government.

10) Now that the House has authorized the suit, what happens next?

The Wall Street Journal reports the House “isn’t expected to bring the suit for at least another month.” The House Office of General Counsel and any outside lawyers that will be involved in the case likely are deciding which court would be most advantageous and drafting the complaint which will lay out specific allegations as well as the relief the House will seek in its lawsuit.