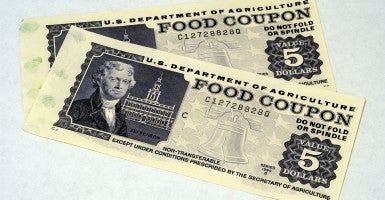 Food stamp use is on the decline.

In recent years, the number of food stamp recipients has skyrocketed, growing by about 26.39 million people from 2003 to 2013, according to The Heritage Foundation’s 2014 Index of Culture and Opportunity. In 2013, about 47 million people received food stamps.

But now there’s a downtick in how many people are using the program.

“About 46.25 million people were enrolled in the Supplemental Nutrition Assistance Program in April, according to the most-recent data available from the Department of Agriculture,” reports Bloomberg. “That’s down 3.2 percent from a high of almost 47.8 million in December 2012.”

The downturn is small, and food stamp participation rates and spending remain near historic highs.

But why the slight turn of events?

Well, the economy is certainly improving. The national unemployment rate is 6.2 percent, down from 7.3 percent in July of 2014.

Is it possible that those who argued that decreasing government assistance to the unemployed would spur people to find jobs were … right?

While the numbers aren’t as rosy for those who have less education, they’re still improving. For those without a high school diploma, the unemployment rate is still high at 9.6 percent, but that’s significantly less than the 10.9 percent rate of July 2013, and way less than the 12.5 percent rate of July 2012. High school graduates are experiencing a similar downward trend in unemployment rates, going from 7.6 percent last July to 6.1 percent now.

But is that the only reason behind the decreased use?

Russell Price, a senior economist at financial planning firm Ameriprise Financial, suggested to Bloomberg that another reason behind the trend could be the decrease in unemployment assistance. From Bloomberg’s report:

“North Carolina could provide a useful barometer for the health of this demographic, Price said. That’s because it cut long-term unemployment benefits in July 2013, six months before the U.S. government, so a decline in this assistance suggests ‘people are getting back into the labor market.’”

Of course, Price doesn’t think the decrease in unemployment benefits is the whole story. (Conservative economists would likely take issue with Price’s assertion that the hike in minimum wage in some areas has also contributed to the decrease in food stamp usage.) But the connection he posits is intriguing: Is it possible that those who argued that decreasing government assistance to the unemployed would spur people to find jobs were … right? And that now some of those same recently employed people no longer need to receive food stamps?

Granted, it’s one economist’s take – and there isn’t data available to show whether Price is correct or not. But policymakers should consider looking into the connection further, especially because the overall extent of the food stamp program is concerning.

“Part of the reason for the large size of the food stamps program are policies that have made it easier for individuals to get and stay on the program,” says Rachel Sheffield, a policy analyst at The Heritage Foundation.

“It is one of the largest of the federal government’s 80-plus means-tested welfare programs and is in need of reform to ensure that it promotes self-sufficiency through work for able-bodied adults,” Sheffield adds. “Encouraging work would better serve individuals and also place the program on a more prudent course.”

It’s great news that more Americans are able to purchase food without needing to rely on the government for assistance. Hopefully, this is just the beginning of a long decline in how many Americans rely on food stamps.