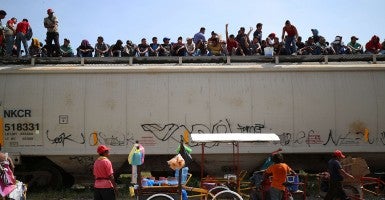 Gov. Rick Perry, R-Tex., will send around 1,000 National Guard troops to the Texas border under his gubernatorial authorities to help the Texas Department of Public Safety deal with the illegal immigration crisis. Before anyone screams that this is unprecedented or the radical militarization of the border, be assured it is not.

In 2006–2008, all four of the southwest border states had contingents of National Guard troops deployed to augment Customs and Border Protection’s Border Patrol assets. This was done without “militarizing” the border, and it was done with great effect. It was called Operation Jump Start.

The troops came as volunteers from National Guard units from across America. Each state organized its assets a little differently but did so in complete cooperation with federal agencies. The units provided surveillance, did logistics, and relieved Border Patrol agents from administrative jobs. This freed up every available officer for real law enforcement duties.

The enforcement of America’s laws was materially enhanced. No soldiers arrested anyone. The troops reveled in a “good” mission that directly helped their country, the Border Patrol was able to do its job, and the flood of illegal activity (immigration and others) was driven down.

Governor Perry would do well to use Jump Start as a model. It worked.

The major difference is that Operation Jump Start was directed from the presidential level. It was a result of national-level planning that included the state governments and allowed for flexibility and mutual cooperation. In the absence of national leadership, Texas must go it alone this time.

Brandon Judd, president of the National Border Patrol Council, which represents most Border Patrol agents, testified this past June that “nearly 40 percent of our manpower is being pulled from the field to perform duties such as processing and caring for those in our custody.” In the face of the present crisis, it is clear that Governor Perry needed to act to protect his state.

It is also important to note that this is not a long-term solution but just a stop gap. The military is not a cost-effective solution for long-term needs at the border. Even more critically, putting the National Guard on the border does nothing to deal with the root causes of illegal immigration: lax enforcement of immigration laws that encourage more illegal immigration and flawed foreign policies that have left willing partners in Central America twisting in the wind.

It will be interesting to see if the feds will attempt to interfere with an action that is well within Perry’s authority. The nation—especially other border states—will be watching.