The Not So ‘Small’ Businesses Ex-Im Bank Boosts 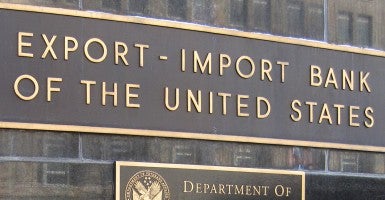 The Conservative Action Project warns Republican lawmakers against making "an end-run around the democratic process and the interests of the American people." (Photo: The Sierra Club/Creative Commons)

A coalition backing government export subsidies will host several executives of purportedly “small” businesses at a briefing Tuesday to build support for the Export-Import Bank (Ex-Im). Although the bank primarily benefits very large corporations, advocates are telling Congress and the public that the bank is crucial to the survival of small firms. If that was true, they could have made a better case by featuring speakers from actual small businesses.

Ex–Im provides loans and loan guarantees as well as capital and credit insurance for U.S. exports. Its current authorization will expire on Sept. 30, and the Obama administration is seeking a five-year renewal and a $20-billion increase in its lending cap.

The bank categorizes manufacturing firms with up to 1,500 workers as “small,” as well as retailers with revenues that exceed $21.5 million.

Advocates know better than to parade before Congress executives from Boeing, Westinghouse, Caterpillar, Bechtel or any of the other large corporations that reap the benefits of more than 80 percent of Ex-Im subsidies. Instead,  a coalition of interest groups apparently hope that representatives of smaller firms will tug at the heartstrings of lawmakers who remain (rightly) skeptical about reauthorizing an agency rife with corruption, and which violates fundamental principles of free enterprise. (Not to mention subsidies to the likes of Russia, China and Venezuela.)

But what constitutes a small business under the Ex-Im regime is not what most Americans would consider to be so. For example, the bank categorizes manufacturing firms with up to 1,500 workers as “small,” as well as retailers with revenues that exceed $21.5 million. Interest group officials apparently think likewise.

For example, Tuesday’s briefing will feature:

Make no mistake—the success of the companies listed above is to be celebrated. But lawmakers should not be fooled that this success represents in any way the value of the Export-Import Bank. In actuality, the bank harms many American small businesses and their workers by subsidizing their foreign competitors.

The reauthorization debate has made this once obscure agency a topic of national interest. In so doing, Americans have learned a great deal about Ex-Im, much of it not very pretty. There have been allegations of corruption, extensive documentation of mismanagement, and a penchant for largesse to multinational corporations that could easily access private financing.

No matter what advocates try to claim about its benefits, there is not even a small justification for reauthorization of the Export-Import Bank.