Why a President’s Judicial Appointments Matter 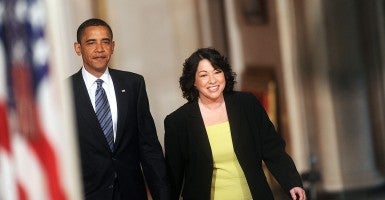 Judge Sonia Sotomayor of the Court of Appeals for the Second Circuit walks in the White House with President Barack Obama to a news conference where he nominated her for the U.S. Supreme Court to fill the spot of retiring Justice David Souter on Tuesday, May 26, 2009. (Photo: Olivier Douliery/Abaca Press/MCT)

One issue voters often overlook when selecting presidential candidates is what type of judges those candidates will support.

These are lifetime appointments, and a two-term president could nominate hundreds of judges to the federal judiciary – with advice and consent of the Senate. From trial-level district court judges to the justices on the U.S. Supreme Court, these appointments may have a much longer and more profound impact on our society and the rule of law than anything else a president may do in eight years in office.

We pay a great deal of attention to Supreme Court nominees on the rare occasions seats open up on our nation’s highest court. And we should because the Supreme Court has the final say on any case that makes its way up from any of the 94 federal district courts throughout all of the states and U.S. territories. But not all of those cases are appealed to the 12 federal courts of appeal, and the Supreme Court usually takes less than 1 percent of the more than 10,000 cases filed with it annually.

Because so few cases reach the Supreme Court, the almost 200 judges on the U.S. courts of appeals are usually the final arbiters of the law. But it is also the almost 700 federal district court judges who hear and often make final decisions on the tens of thousands of cases in the federal court system.

We all know the difference just one justice can make on the Supreme Court. After all, the only reason our healthcare system was taken over by the federal government through Obamacare is because five of the nine justices decided it was constitutional over the vehement objections of the other four justices. If just one of the five justices in the majority had joined the dissenters, then Obamacare would have been struck down.

But the judges appointed by the president to the district and appeals courts also can make a big difference. A vivid illustration of that was shown recently in the context of voter ID. In May, a federal district court judge in Wisconsin, Lynn Adelman, who was appointed by President Clinton, ruled Wisconsin’s voter ID law was unconstitutional and even said the Supreme Court’s decision in 2008 upholding Indiana’s voter ID law as constitutional was “not binding precedent.”

Yet in February, another federal district court judge in Tennessee, Ronnie Greer, who was appointed by President George W. Bush, upheld Tennessee’s voter ID law as constitutional and said in his opinion the Indiana case was “the controlling legal precedent.” Hopefully, the Wisconsin decision eventually will be overturned on appeal, but that may require years of time and resources.

The contrast between these two decisions shows the importance of selecting judges who understand their duty is to follow legal precedents and the Constitution, not implement their own personal views of what they think the law should be. It is vital that we as voters make sure the candidates we support will nominate judges who will interpret and uphold the Constitution instead of trying to formulate what our public policy should be based on their views or the popular, politically correct view of the moment.

In Federalist No. 78, Alexander Hamilton warned that “there is no liberty, if the power of judging be not separated from the legislative and executive powers.” If we do not elect a president who will appoint to the federal bench only judges who see themselves as judges, not legislators or executives, we will have lost a fundamental building block that has bound our republic and protected our freedoms and liberty for more than 200 years.