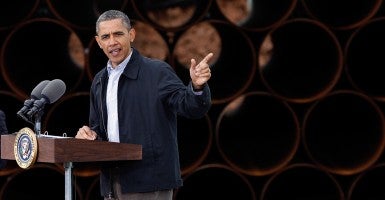 The Washington Post reports that Nebraska’s supreme court will not hear oral arguments on the Keystone XL pipeline’s route through the state until early September, making a decision from President Obama before the November elections “highly unlikely,” according to an Obama Administration official. The original application for the pipeline was submitted in September 2008.

This is particularly perplexing given President Obama’s use of unilateral executive power. The President’s track record demonstrates that, when he wants something, he doesn’t really care what the courts have to say. Take, for instance, the President’s recent recess appointments and his comments after the U.S. Supreme Court’s decision.

The delay of the Keystone XL pipeline serves as yet another example of how executive involvement in these decisions adds costs. In this case, it is delaying the benefits that increased energy production provides. The Keystone XL project would transport up to 830,000 barrels of oil per day. The Canadian Energy Research Institute estimates that construction for the project would create an estimated 179,000 American jobs.

Whether President Obama and environmentalists like it or not, this oil is going to be produced and refined somewhere. Canada will not allow the oil to sit in its tar sands indefinitely. Currently about 180,000 barrels per day are being transported by truck and rail. Shipping the oil via pipeline is more efficient and environmentally safe: By transporting it to our Gulf Coast refineries, the U.S. can ensure that this heavy oil is refined in modern processing facilities further, minimizing environmental impact. Approving the pipeline would also foster trade relations with Canada, one of the United States’ closest allies.

The President has received and will continue to receive criticism from environmentalists about the Keystone XL pipeline. However, a Washington Post/ABC News poll found that Americans overwhelmingly support the pipeline by nearly a 3-to-1 margin—and why shouldn’t they, with all the advantages the project would provide?

In this year’s State of the Union address, President Obama stated that this would be “a year of action” and that “wherever and whenever I can take steps without legislation to expand opportunity for more American families, that’s what I’m going to do.” Yet that clearly is not what the President is doing when it comes to this pipeline.

It’s time for Congress to step in and do what is best for the American people by approving the pipeline immediately.

Hanna Hebert is currently a member of the Young Leaders Program at The Heritage Foundation. For more information on interning at Heritage, please click here.