The Civil Rights Act at 50 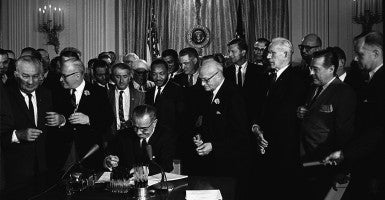 Today marks the 50th anniversary of the passage of the 1964 Civil Rights Act. One of the most monumental laws in American history, it was intended to stop the horrendous, widespread discrimination that was still occurring 100 years after the Civil War ended slavery. This is a time to celebrate the tremendous gains we’ve made in 50 years since Congress passed this historic law, but it is also time to evaluate whether we’ve moved too far from its original purpose.

The 1964 Act prohibited discrimination in public places, integrated schools and other public facilities and outlawed employment discrimination. It helped spur the societal change that has made racial discrimination both illegal and socially unacceptable. Unfortunately, in the last 50 years, many courts and government bureaucrats – with the support of numerous advocacy organizations and academics – have twisted the law to permit and support what Congress intended to ban: discrimination on the basis of race.

As a 2011 report by the Congressional Research Service detailed, the federal government has allowed the proliferation of goals, set-asides and preferences based on race, gender and ethnicity. So have many state and local governments. Yet, discrimination on the basis of race is unconstitutional, unlawful and morally repugnant. The government should not be in the business of sorting people by such innate characteristics.

But too often an applicant’s skin color is taken into consideration in hiring and promoting public employees, admitting students to public universities and awarding public contracts and grants. Racial preferences are nothing more than government-sanctioned discrimination, and discriminating today against individuals who had nothing to do with past discriminatory practices that are long gone is wrong.

Limited exceptions are permissible, for example to remedy specific past discrimination. Unfortunately, these exceptions have become the rule and have been abused to create a racial spoils system throughout all levels of government. The bottom line is that jobs should go to the most qualified, contracts should be awarded to the lowest qualified bidder and students most likely to excel academically should be admitted to taxpayer-funded universities.

In 50 years, we’ve strayed from advancing Dr. Martin Luther King, Jr.’s dream – shared by the vast majority of Americans – that Americans should “not be judged by the color of their skin, but by the content of their character.”

Americans overwhelmingly agree racial preferences are unfair. A June 2013 Washington Post/ABC poll found 76 percent of Americans oppose allowing schools to consider the race of applicants in deciding which students to admit. A May 2014 poll of people ages 14 to 24 showed that 88 percent believe “favoring one race over another is unfair” and 90 percent said everyone “should be treated the same regardless of race.”

On this 50th anniversary of the Civil Rights Act, Congress should take to heart that Americans believe in equal protection for all by banning racial preferences in all federally funded programs—from employment to education to contracting. Likewise, states should ban racial preferences either by statute or through the ballot referendum and initiative process (as the Supreme Court upheld this term).