New York Lawmakers Make It Illegal to Touch a Tiger 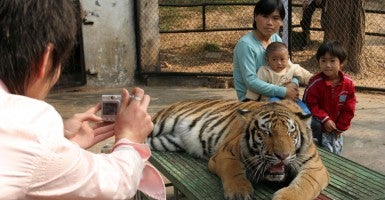 Children take photos with a tiger in a zoo in China. New York is considering a bill that would make the practice illegal. (Photo: EyePress/Newscom)

State Rep. Linda Rosenthal, a Manhattan Democrat who sponsored a bill that passed this week, pointed to New York’s history of tiger attacks—seven over the past 15 years, according to her office—as evidence the ban is in the public’s best interest.

“There is no safe or humane result when direct contact with wild animals is allowed,” she wrote in a memo that accompanied the legislation.

>>> ‘Drop the Cabbage, Bullwinkle!’: Alaskan Man Faces Prison for the Crime of Moose-Feeding

Specifically, the bill prohibits “hugging, patting, or otherwise touching” tigers at fairs or circuses. Getting caught doing so will cost you $500—which is still probably less than the hospital bill you could incur from trying to snuggle with a 500-pound jungle cat.

According to the Wall Street Journal, which investigated the phenomena, guys who use the online dating site Tinder have a particular affinity for taking their picture with the animals—so-called “tiger selfies.” According to the Journal, some users of the site estimated that one in every 10 guys on the site had a tiger picture.

What is a single guy in New York to do?

“They can still pose with bears and monkeys,” she told the New York Post. “They just have to take big cats off their list.”

Rosenthal has a long history of animal-themed legislation. This year she is also pitching a bill to ban tattooing and piercing zoo animals and pets.