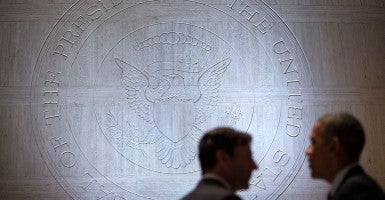 Today, in a blow to the Obama administration, the U.S. Supreme Court ruled 9-0 that President Obama’s “recess appointments” to the National Labor Relations Board violated the Constitution in NLRB v. Noel Canning.

Art. II, section 2, clause 3 of the Constitution allows the president to “fill up all Vacancies that may happen during the Recess of the Senate.” On Jan. 4, 2012, President Obama made several recess appointments even though the Senate had been convening “pro forma” sessions every three days. These appointments were challenged in a labor dispute before the NLRB, and the U.S. Court of Appeals for the D.C. Circuit struck them down as unconstitutional.

Today, the Court, in an opinion by Justice Stephen Breyer, held the president may make recess appointments to existing vacancies during intrasession (breaks during a session of Congress) and intersession (breaks between sessions of Congress) recesses of a “sufficient length.” The Court determined the vacancy need not occur during the recess, which upholds the broad practice dating back to the presidency of James Madison.

Though the Court declined to specify what constitutes a “sufficient length,” it acknowledged a recess of three days (as in this case), and likely even 10 days, is insufficient. The Court also stated the Senate “is in session when it says that it is.” This upholds the Senate’s practice of entering “pro forma” sessions to prevent the president from making recess appointments.

Four justices would have gone even further. In his concurring opinion, Justice Antonin Scalia, joined by Chief Justice Roberts and Justices Clarence Thomas and Samuel Alito, stated the text of the Constitution makes clear recess appointments are limited to intersession recesses and vacancies that actually arise during that recess. Scalia criticized the majority for “cast[ing] aside the plain, original meaning of the constitutional text in deference to late-arising historical practices that are ambiguous at best.”

Today’s ruling is a victory, though a narrow one, against an encroaching executive branch and a rebuke to one of President Obama’s more prominent unilateral actions. Today’s decision marks the 12th time the Supreme Court unanimously ruled against the Obama administration on the issue of executive power. Although the opinion leaves room for future presidents to continue the practice followed by many presidents, President Obama pushed the envelope by making recess appointments when the Senate was convening in “pro forma” sessions every three days. This never had been done before, and today the Supreme Court made clear that recess appointments are the subsidiary method for appointments—not a way for the president to circumvent the Senate’s advice-and-consent role.