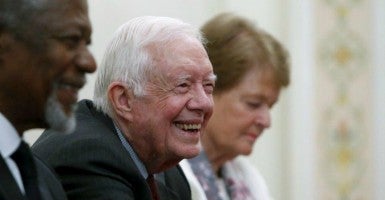 In a rare alignment of two very different politicians, Jimmy Carter and Chris Christie agree in their belief that America is less respected in the world than it was when President Obama took office in 2009.

“I can’t think of many nations where we have a better relationship than we did when [Obama] took over,” Jimmy Carter says.

Christie, the two-term New Jersey governor, zinged Obama on foreign policy in some of the most well-received lines of his announcement Tuesday morning that he will seek the Republican nomination for president.

“After seven years I heard the president of the United States say the other day that the world respects America more because of his leadership,” Christie said. “This convinces me it is the final confirmation that President Obama lives in his own world, not in our world.”

It was a big applause line.

Not so much when Carter, the Democrat who served one term as the 39th president, said something similar last week in a public event—video of which began to surface late Tuesday.

America’s “influence and prestige and respect in the world is probably lower” than seven years ago, he said.

“The United States’ influence and prestige and respect in the world is probably lower now,” Jimmy Carter says.

Carter, 90, seemed to stun into silence a standing-room-only crowd at an Aspen Institute gathering in Aspen, Colo., when he said he “can’t think of many nations in the world where we have a better relationship now than we did when [Obama] took over.”

On the world stage, I think they’ve been minimal. I think he’s done some good things domestically, like the health program and so forth. But on the world stage, just to be as objective about it as I can, I can’t think of many nations in the world where we have a better relationship now than we did when he took over.

During his off-the-cuff announcement remarks, Christie also criticized Obama for “weak and feckless foreign policy” and warned his audience not to “turn it over to his second mate, Hillary Clinton.”

Carter reiterated that he doesn’t “blame” Obama because “it’s been circumstances that have evolved.”

The former president and Georgia governor repeated praise for John Kerry, whom Obama chose to succeed Clinton as secretary of state.

To applause, Carter called Kerry “outstanding” and “one of the best secretaries of state we’ve ever had.” He later said Kerry is “very courageous and innovative and dynamic.”

The Washington-based Aspen Institute is an educational and policy studies organization with a mission “to foster leadership based on enduring values and to provide a nonpartisan venue for dealing with critical issues.”

Isaacson’s hour-long conversation with Carter and his wife, former first lady Rosalynn Carter, took place June 23. In this video from C-SPAN, Carter’s remarks on Obama and the world stage begin at the 19-minute mark.