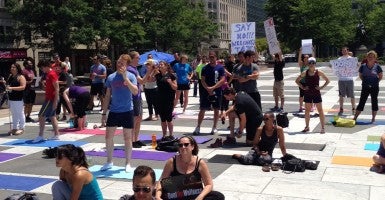 If you live in D.C., your fitness plan just got more expensive.

The D.C. Council passed a 5.75 percent sales tax on gym memberships and fitness classes Tuesday, despite protest from fitness devotees who dubbed it the “yoga tax.”

The tax is supposed to partially offset the cost of D.C.’s income tax cuts. Some are skeptical, including mayoral candidate David Catania who proposed an amendment that would expunge the gym tax from D.C.’s budget.

“It’s a penny-wise and pound-foolish proposition,” Catania said as proponents of the amendment cheered in the chamber, reported the Washington Post. “We are looking at increased and deferred health costs in the long run.”

“Taxes impact business activity,” Evans said, as reported by DCist. “To put a tax on fitness is going to hurt business.”

However, the tax had its backers, including Ed Lazere, executive director of the D.C. Fiscal Policy Institute, who pointed out to the Wall Street Journal that other beneficial goods are already taxed.

“If I went out on the street today and said, ‘Let’s tax books,’ people would be up in arms,” he told the Journal. “They would be sending emails saying, ‘You can’t tax books! Do you want to discourage reading?’ And I’d have to remind them that we already do tax books.”

Curtis Dubay, a tax analyst at The Heritage Foundation, indicated the issue was often misunderstood in debate. “It is important to remember that this was part of a tax reform package that lowered other taxes and broadened the tax base,” he says. “What they did was actually good tax policy because they are more broadly applying their sales to services. This wasn’t a specific tax hike on fitness. Those that are saying it is are being disingenuous.”

“I do not support a tax on healthier living,” Gray wrote. “Whatever modest amount of additional revenue we take in in the short term, we will end up paying far more in the long run if we tax fitness.”

In the end, Catania’s amendment didn’t garner enough support to pass so D.C. gym-goers can expect the cost of their memberships to rise on October 1. Catania took to Twitter immediately following the vote, claiming that if elected mayor he will repeal the so-called “wellness tax.”