Will Conservatives Back Sentencing Reform Merging ‘Compassion and Common Sense’? 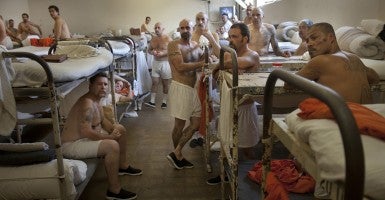 'A big problem on our hands': Prisoners bed down in a former day room at the California Institution for Men in Chino, Calif. (Photo: Patrick Tehan/San Jose Mercury News/MCT)

A voter initiative aims to attract bipartisan support for relieving prison overcrowding by reducing sentences for non-violent crimes and putting the savings into community programs.

The question inching closer to the ballot seeks to downgrade low-level felonies — petty theft, receiving stolen property, forging and writing bad checks, minor drug possession — to misdemeanors. Those already convicted for such crimes would be considered for resentencing.

Violent crimes including rape, murder, and sex offenses could not be downgraded, however.

A California ballot measure seeks to downgrade low-level felonies. Will conservatives support it?

The state is California and the initiative is called the Californians for Safe Neighborhoods and Schools Act.

“It’s common-sense reform that seeks to go ahead and humanize offenders that are guilty of personal drug possession and shoplifting,” businessman and philanthropist B. Wayne Hughes Jr., a major proponent of the initiative, said in an interview with The Daily Signal. “Those are crimes that are not worthy of being called a felony.”

Supporters say the initiative, proposed for this fall, would save California taxpayers $150 million to $250 million per year, amounting to as much as $1.25 billion over five years. The proposal would redirect the money to mental health and drug treatment, crime prevention programs in schools, and victim services.

>>> Surprising Ingredient for Bipartisan Reform: ‘Orange Is the New Black’

State officials have until June 26 to review signatures and determine whether the measure qualifies to go before voters.

So far the initiative primarily has gained traction with Democrats. Hughes, one of few conservatives to offer his public support, made his fortune with Public Storage,  the self-storage giant started  in 1972 by his father.  Last year he founded Serving California, a nonprofit Christian ministry assisting ex-offenders, crime victims, and veterans. He also is a donor of The Heritage Foundation.

“This measure brings hope and reform and a reset opportunity for thousands of fellow Californians, and I think that it’s the right thing to do,” Hughes said. Conservatives tend to argue that such initiatives put convicted criminals back on the streets, endangering public safety, notes John Malcolm, director of The Heritage Foundation’s Edwin Meese III Center for Legal and Judicial Studies. Some, however, see the benefit of programs aimed at repairing dysfunctional relationships as well as sentencing reforms that can reduce ongoing costs to taxpayers.

Hughes contends that low-level felons are stuck in a system that breeds reincarceration. Instead of going to prison and getting a “first-class education” on how to become a criminal, he told The Daily Signal, some offenders will be able to put their lives on a better track under the Safe Neighborhoods and Schools Act. Hughes added:

We have people in our community that are hurting. We have a big problem on our hands. One of the ways to solve that is to look at things not just through the lens of punishment, but through compassion and common sense reform.

Under Gov. Jerry Brown, a Democrat, California’s prison population hovers around 117,500. The state’s penitentiaries, though, were designed to hold just under 80,000 inmates.

In 2011, the U.S. Supreme Court in Brown v. Plata upheld a lower court ruling that California must reduce its prison population because of rampant overcrowding. The high court said poor health care for prisoners was one result and a violation of the Eighth Amendment’s ban on cruel and unusual punishment.

The decision sent state officials scrambling to find ways to reduce the overcrowding – one of which was to send inmates to other states. The Golden State has until 2016 to comply.

Hughes said the Safe Neighborhoods and Schools Act serves dual purposes: It helps Californians and complies with the court order.

“Having an initiative that would take the pressure off would give some of the ex-offenders a chance to remove the yolk of a felony from around their necks,” he said. “It’s a way to hit the reset button.”

>>> Commentary: How to Fight Poverty — and Win

When Texas lessened sentences for drug offenders, for example, it led to the lowest crime rates in the state since 1968. In Michigan, rates for violent crimes as well as property crimes decreased after the state eliminated mandatory minimum sentences for most drug offenses. The changes were applied retroactively.

At the Faith and Freedom Coalition’s Road to Majority conference in Washington, D.C., on Friday, New Jersey Gov. Chris Christie made a pitch for sentencing reforms, especially for first-time drug and alcohol offenders.

Other Republicans have eyed sentencing reform as a way to cut costs, especially in a stagnant economy. But Hughes said California conservatives he has encountered aren’t convinced initiatives such as the one he champions could work.

If we’re going to go ahead and be in touch with each other, we have to look at places that are uncomfortable with us. There’s a large bandwidth of our society that’s hurting. … For us as a society, we can begin to judge ourselves by how we treat the least of the least. And the least of the least are the ones who are in prison.