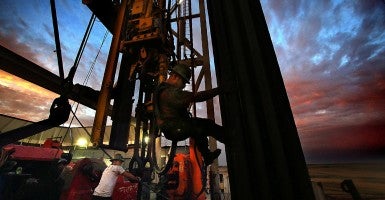 North Dakota has drilled its way into the record books, producing more than a million barrels of oil a day. Fueled by the energy revolution in the Bakken Oil Fields, North Dakota now supplies 12 percent of the nation’s total oil production.

According to the state’s Department of Mineral Resources, in the month of April, North Dakota drilling peaked at 1,001,149 barrels a day. With these figures, North Dakota joins just four other states to have reached the historic mark—Louisiana, Alaska, California and Texas.

James Fallon, director of IHS, a leading global information firm, told the Associated Press: “North Dakota could be an OPEC country of its own in terms of production—it’s essentially the production of Ecuador.”

The state currently produces more than 1 percent of total global output, and according to the director of North Dakota’s Department of Mineral Resources, Lynn Helms, that number is expected to grow.

In a conference call with reporters, Helms said inclement weather hampered April production as floods washed out roads and high winds kept companies from drilling for days. As the weather improves in the summer months, he predicts North Dakota will reach full potential.

David Kreutzer, a senior energy analyst at The Heritage Foundation, heralds the success as a triumph of the free market and deregulation. “Thank goodness the Obama administration couldn’t block the safe development of the Bakken and Eagle Ford oil reserves,” he said.

Kreutzer pointed to the developing crisis in the Middle East as further evidence that the United States should continue to pursue more domestic energy solutions.