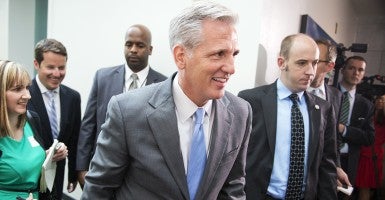 In the election to replace McCarthy as majority whip, Steve Scalise of Louisiana bested Peter Roskam of Illinois and Indiana’s Marlin Stutzman.

Early vote counts had predicted McCarthy, 49, and Scalise, 48, would emerge victorious in their respective races.

The Republican conference met at 2 p.m. in the House Ways and Means Committee room to cast secret ballots. After the majority leader election, Republicans moved on to elect a new majority whip. The No. 3 spot opened up after McCarthy announced he would vie for majority leader, the No. 2 leadership post.

Meeting with reporters after the elections, House Speaker John Boehner, McCarthy, and  Scalise all touched on the need for smart economic policies to stimulate a stagnant economy.

“We’ve got solid, conservative solutions that are going to solve the problems facing this country,” Scalise said.

The leaders agreed the House’s first priority continues to be job creation, and vowed to listen to the concerns of Americans. McCarthy said:

I will work every single day to make sure that this conference has the courage to lead and the wisdom to listen, and we’ll turn this country around.

The winner of each contest must secure a simple majority – 117 of the 233 House Republicans, though not all were in attendance. Final vote counts traditionally are kept confidential and the ballots destroyed following leadership elections. Some members did ask for the vote counts to be announced following today’s elections, but the request was denied.

McCarthy and Scalise will hold their new positions for roughly 12 legislative days after Cantor steps down officially July 31 because Congress has long breaks in August and October.

After the midterm elections in November, Republicans will hold another election for  leadership positions, including the No. 4 slot of conference chair held by Cathy McMorris Rodgers of Washington. This could result in a reshuffling of the lineup.

“He and I have worked well together over the past few years,” Hoyer said, “and I look forward to continuing to work with him in his new capacity to advance legislation in the House that addresses the priorities of the American people.”

Members of the Republican conference gathered yesterday morning for a candidate forum that featured those vying for the leader and whip spots under Boehner.

Labrador delivered an impassioned speech asking this colleagues  to buck the status quo of current leadership. Although Labrador’s heartfelt campaign made a good impression on the GOP caucus, he could not overcome McCarthy’s many alliances as whip to secure the win.

In the whip race to replace McCarthy, Scalise emerged as an early front-runner. Stutzman appeared to gain momentum among fellow conservatives, who were skeptical of Scalise’s ties to leadership.

Scalise won on the first ballot, avoiding a runoff with either Stutzman or Roskam, the current deputy whip.

Although Scalise chairs the 170-member Republican Study Committee, some conservatives regarded him as too cozy with Speaker Boehner’s “establishment” leadership team. The Louisianan also was seen  as doing little to advance the conservative agenda.

Roskam  already was  part of leadership as deputy whip, but rarely appears to earn the support of top Republicans. Now, Stutzman could seek to take over the RSC chairmanship from Scalise.