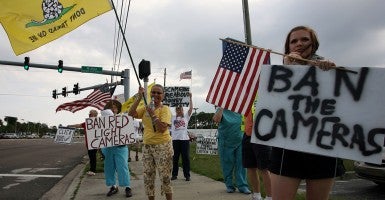 But they shouldn’t get too excited.

The high court ruled last week that Florida cities didn’t have the authority to use red-light cameras to ticket motorists prior to 2010, or until the state Legislature enacted laws specifically allowing them.

Tens of thousands of fines are invalidated as a result, but it’s not likely ticketed motorists will get their money back unless they legally challenged their citations.

Christopher Torres, a defense attorney at Casey & Torres, a Tallahassee law firm, said all of the fines should be repaid.

“If you’re compelled to make a payment, then it’s not a voluntary transaction,” Torres said. “Most people don’t appeal because one way or another they can’t afford to.”

Writing for the 5-2 majority, Justice Charles Canady said state law preempted municipalities from adopting their own “enforcement regimes” unless they were spelled out in the Florida Uniform Traffic Control Law.

Red-light cameras were not.

Thursday’s ruling specifically addressed local ordinances in Orlando and Aventura, but applies throughout the state.

“The Orlando and Aventura ordinances are invalid because they are expressly preempted by state law,” wrote Canady.

The court refrained from delving into the “wisdom and public policy questions” relating to red-light cameras. But groups like the National Motorist Association have raised a number of objections ranging from the constitutional right to confront one’s accuser to public safety concerns.

Even though we’re pleased with the court’s decision, there is some concern that many drivers who got tickets and paid the fine won’t get refunds, unfortunately. This is due to a legal principle known as the voluntary payment doctrine. Those who disputed their tickets may have a better chance for a refund, although we believe everyone who got a ticket should get a refund.

In dissent, Justice Barbara Pariente said the use of red-light cameras were legal because the state didn’t expressly forbid them.

William Patrick is a reporter for Watchdog.org, a national network of investigative reporters covering waste, fraud and abuse in government. Watchdog.org is a project of the nonprofit Franklin Center for Government & Public Integrity.