How Part-Time Jobs Became the New Normal for Millions 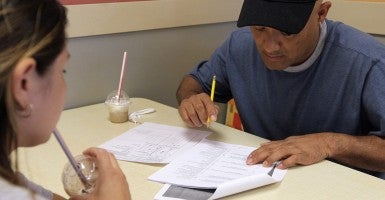 Marsadeise Barginere, a food service worker in Cleveland, has had her hours cut from full-time to part-time. She’s not alone. Luke Perfect “barely scrape(s) by” at his job in a Subway in Maine. Nonetheless his employer will also put him on part-time status once Obamacare takes effect.

Workers all across America have seen their hours cut. Just search for “work hours cut” on Twitter to see them sharing their frustration. Shorter workweeks and part-time jobs have become the new normal for millions of low-income Americans.

Of course, employers usually reduce work hours in times of economic distress, then increase them once the crisis passes. That’s exactly what happened in the most recent recession … for workers in the middle three income quintiles. But the recovery never happened for workers in the bottom fifth of the wage distribution. Their hours fell and did not come back.

Congress and the media have paid much less attention to this phenomenon than to other labor-market problems. Along with high unemployment and deteriorating labor force participation, shorter workweeks show the recovery has bypassed large segments of the labor market.

Hours have dropped even in industries that have financially recovered from the downturn. Retail sales have now risen above pre-recession levels, for example. Yet the average workweek for lower wage retail workers has not increased since 2009.

These shrinking workweeks have particularly hurt the most vulnerable by cutting their home pay. Shorter hours mean the average worker in the bottom quintile takes home almost $500 a year less. In discussing income inequality, pundits often overlook hours inequality: those in the top quintile make more in part because they work much longer hours than those in the bottom.

The ACA penalties will raise the average cost of hiring workers in the bottom quintile by one-sixth – if they work full time. However, businesses can avoid these costs by cutting workers’ hours to part-time, just as happened to Marsadeise and Luke. Polling shows a third of franchised businesses (such as fast food restaurants) have responded to Obamacare by cutting hours. That figure will only rise when the penalties kick in next year.

Obamacare also encourages many low and moderate income workers to prefer part-time jobs. Employees generally work full-time for two reasons: to make more money and to get health benefits. Under the ACA, the government now subsidizes health benefits, but only for workers whose employers do not offer them it. Many workers can now make as much working part-time without health benefits, taking all their compensation in cash, and collecting exchange subsidies as they would by working full-time and taking part of their compensation as employer-provided health coverage.

Casey Mulligan of the University of Chicago has shown this applies even to middle-class parents making $28 an hour. Many more Americans will choose part-time jobs if they make as much in them as in full-time work.

Consequently Obamacare will put downward pressure on both the supply of and demand for full-time jobs. The Congressional Budget Office estimates the ACA will appreciably shrink total hours worked in the economy over the next decade, finding the largest declines “will probably occur among lower-wage workers.”

Even shorter workweeks will make it harder for low-income Americans to get ahead. Workers with full-time schedules earn raises and promotions more rapidly than part-time workers. Reduced hours mean workers take longer to gain experience – and the higher pay that comes with it. Policies that depress working hours are hurting workers such as Marsadeise and Luke. And the damage will continue to hurt them for years to come.