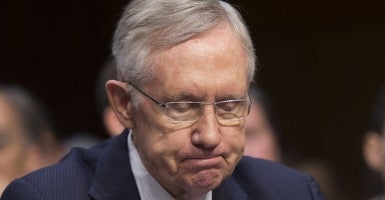 “Whitehouse exerted pressure on federal agencies to target tea party non-profits and to criminally prosecute groups such as ours,” the complaint reads.

Whitehouse was the main sponsor of the DISCLOSE Act, legislation that would have forced nonprofits who make campaign donations to disclose their donors.

Cleta Mitchell, an attorney representing the Tea Party Patriots, says the complaints were timed to coincide with a Senate Judiciary Committee meeting Tuesday, where congressional leaders, including Reid, clashed over a proposed constitutional amendment to curb political spending.

“We are tired of Reid, Democratic senators, and the White House bullying conservatives and conservative donors,” Mitchell said. “They do not respect the First Amendment rights of citizens and we are sick of it, so we are fighting back.”

Speaking at the Senate Judiciary Committee meeting, Reid defended the proposed amendment, a plan that Democrats plan to vote on this year.

“I support this constitutional amendment,” Reid said. “Our involvement in government should not be dependent on bank account balances. It’s bad for America. What the nation needs is to bring sanity back to campaigns.”

Upon receiving a complaint, the Senate Select Committee on Ethics, chaired by Sen. Barbara Boxer, D-Calif., will initiate a preliminary inquiry to review the case.

If the committee finds substantial evidence, it can issue a public or private letter of admonition, or initiate an adjudicatory review. It can then recommend the Senate take disciplinary action.

In another, unrelated complaint filed Tuesday with the Senate Select Committee on Ethics, the Center for Competitive Politics, another conservative nonprofit, charges nine Democratic senators with “interfering with the administrative proceedings of the IRS.”