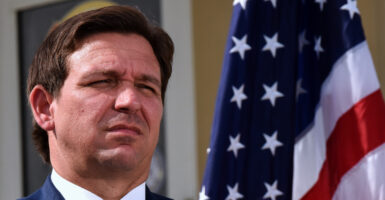 The College Board has backed down to Florida Gov. Ron DeSantis, and now will revise its national Advanced Placement course in African American studies.

This happened following a week in which left-wing media went apoplectic, unleashing a torrent of bad press portraying the Republican governor as a dangerous fanatic and insinuating that he’s racist.

One MSNBC columnist called DeSantis’ objections to the course an attack on “free thought,” as if the Left cares about such a concept when its adherents have power.

A Florida state representative wrote on Twitter that Florida was a “don’t say black state.”

All hyperbolic nonsense in reaction to a much-needed line in the sand. We shall see what the revised AP standards are when the College Board makes its full release, but this is still a big deal.

The Florida Department of Education rejected the original AP course standards for the black studies course under the state’s Stop WOKE Act, citing a lack of educational value and historical accuracy.

“As presented, the content of this course is inexplicably contrary to Florida law and significantly lacks educational value,” the Department of Education’s rejection letter said. “In the future, should [the] College Board be willing to come back to the table with lawful, historically accurate content, [the education agency] will always be willing to reopen the discussion.”

To draw attention to the issue and not simply capitulate to the College Board cartel, which holds a practical monopoly on Advanced Placement testing, is exactly the kind of tactic that needs to be used to loosen the far Left’s ascendent institutional strength.

In this case, Florida put a halt to ideological quackery masquerading as “history” being force-fed to aspiring college students.

It wouldn’t be at all surprising to see the College Board come back with a revised course that is nearly as awful, but something tells me that DeSantis will follow up—as he has on so many other issues.

The Left often claims that there is no critical race theory being taught in K-12 schools, that it’s all just right-wing conspiracy theory. It’s just “honest history,” they say. Nonsense.

Most of the time, this is just a dodge. True, you won’t typically find the works of Kimberle Crenshaw, Derrick Bell, and other CRT theorists being taught directly to kindergarteners. Instead, schools use lessons that draw on critical race theory and similar ideas to create narratives that conform to CRT’s core concepts.

The narrative that the Left wants to enforce is that the United States is hopelessly flawed and has institutionalized white supremacy. To promote diversity, equity, and inclusion we must upend traditional American institutions and ideals and  fundamentally transform the country.

The result often comes in the form of promoting racism in the name of “anti-racism”—as long as the racism is being directed at historical oppressor groups as defined by the Left.

You don’t need a direct citation of CRT’s founders to promote those views.

However, the African American studies course rejected by Florida does borrow directly from these thinkers. The Florida Department of Education cited specific areas of concern.

In a section about intersectionality, the course includes readings from Crenshaw and Angela Davis, a self-avowed Marxist who worked closely with cult leader Jim Jones once upon a time.

Another section on “Black Queer Studies” includes readings from Yale professor Roderick Ferguson, who wrote: “We have to encourage and develop practices whereby queerness isn’t a surrender to the status quo of race, class, gender, and sexuality. It means building forms of queerness that reject the given realities of the government and the market.”

This clearly isn’t just a lesson about black Americans and history; it’s meant to reinforce a particular ideology as the norm. Why should that be acceptable for Advanced Placement history tests?

This is hardly the first time there has been a similar problem with the College Board. It has used its institutional influence to push—pun intended—left-wing social justice and woke nonsense on students for years in a framework for Advanced Placement U.S. history, or APUSH.

The College Board now functions as a kind of gatekeeper to the woke, higher education cathedral. It ensures that students who want to get a degree at an elite college are already inculcated in its orthodoxies.

You see this same phenomenon at elite college prep schools, where the emphasis has shifted from a real education toward ensuring that students are conversant in the language and ideology of the new Left.

You want to be on the track to success? Then obey the new creed, or else. That’s the message young people get now.

Well-rounded pedagogy has been replaced by indoctrination and intimidation. Therefore, as with DeSantis and Florida, it’s entirely appropriate for political leaders in states that haven’t fully bought into the revolution to use power to counteract power.

After all, the people who pay for that education have a right to reject indoctrination and set their own standards for educating their children.

Now, this isn’t the first time that the College Board has received blowback, but this feels like a more substantial victory.

Typically, when the College Board meets actual resistance, it makes excuses, dials back just a bit, then carries on with only a few tweaks to its progressive standards. That’s what happened in 2014. But the changes were minimal at best.

As education expert Stanley Kurtz writes for National Review, what DeSantis did to reject the College Board’s standards may set off a chain reaction in other red states.

Kurtz explains why it will be a massive blow to the woke Left if DeSantis follows through, and not just on this set of Advanced Placement history standards:

The K–12 school curriculum is supposed to be set by the people’s representatives at both the state and local levels. For too long, the College Board’s AP program has constituted an end-run around that democratic process, allowing radical academics to impose their biases on our schools. If DeSantis wins this battle, he will have created a way of blocking that end-run on many subjects, not just AP African-American studies.

Other Republican governors now will be encouraged to pull the plug on the College Board’s woke social engineering, just as voters now know that they still hold real power over education if their elected officials are willing to use it. This should have happened years ago, but better late than never.

Again, we see how one man with courage gives others courage and can build a majority to stop the woke institutional takeover of everything.