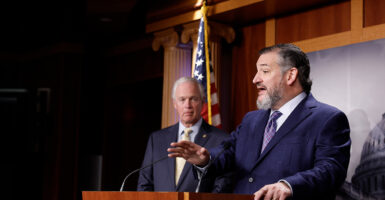 Legislation introduced by Sen. Ted Cruz, R-Texas, on Wednesday aims to stop the flow of American oil into Communist China.

“The Strategic Petroleum Reserve was intended to ensure that America had sufficient oil,” Cruz said in a news release. “Instead, Joe Biden sold oil to the Chinese Communist Party when the CCP was stockpiling oil for its own strategic use, and while Americans are paying higher and higher prices for fuel because of the Biden administration’s disastrous energy policies.”

“We need to immediately act to stop this from happening in the future enemies and unleash American energy,” he added.

The Biden administration has released more than 250 million barrels of oil from the SPR to stop rising fuel prices. The president first ordered the Department of Energy to tap into the reserve in November 2021, saying it was a “major effort to moderate the price of oil.” Biden announced a 30-million-barrel release and an additional 180-million-barrel release in March 2022 in response to Russia’s invasion of Ukraine.

The releases have brought the SPR to its lowest level since 1986. Chinese-controlled companies have successfully purchased two million barrels at auction, though they possess one of the world’s largest oil stockpiles.

The U.S. House of Representatives recently passed similar legislation by a bipartisan vote. Cruz co-sponsored the bill with 14 other senate Republicans.