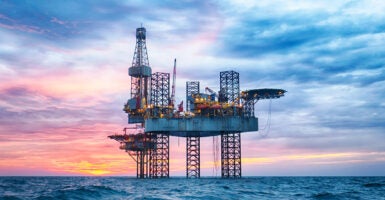 Many factors affect the price of gas at the pump, from simple economics to government barriers that limit supply and increase prices. Pictured: An oil drilling rig off the U.S. coast. (Photo: nielubieklonu, iStock/Getty Images)

When gas prices are high, as they are right now, some policymakers will offer up myths, like price gouging, to explain what’s going on. But the reality is quite different. While harmful government barriers that limit supply are often to blame, there are also simple economics at play and challenges that exist across the oil supply chain.

This is article No. 2 of 5 exploring “What You Need to Know About Gas Prices.” This series looks at everything from what goes into the price of a gallon of gas to recommendations for policymakers to bring prices down. Click HERE or see the end of this piece to find links to other articles in this series.

Understanding what goes into the price of gas at the pump is critical to both understanding energy and developing sound government policy.

According to the latest Energy Information Administration data, the cost of crude oil accounts for the majority (54%) of the retail price of regular gasoline. Refining makes up 18%, distribution and marketing 17%, and taxes 11%.

Let’s take a deeper look at some key history, how the oil supply chain works, and some of its challenges:

Long before it got the nickname “black gold,” crude oil was essentially worthless when it bubbled to the surface in Pennsylvania. Human ingenuity through chemistry revealed that refined oil could lubricate equipment and light American homes and businesses. Soon the oil fields boomed, and refineries popped up throughout the Northeast United States.

Not long thereafter, another oil product, gasoline, found its dance partner in the internal combustion engine. Americans have been driving for more than 100 years, counting on gasoline being available at the local filling station, perhaps unaware of the huge capital and labor investments that enabled oil to be located, produced, and refined into the fuel that gets them to work, school, and around town.

American oil companies today are organized much differently than Standard Oil, which handled every aspect of finding, producing, refining, and even selling petroleum products. A few integrated companies span multiple parts of the supply chain today, but most don’t.

Geologists, chemists, and landmen have to first locate and secure ownership of mineral rights to produce (extract) crude oil from deep under the earth. Some oilfields have been producing for many decades, but as old fields are depleted, new fields have to be found.

The United States is the top crude oil producer in the world at about 15% of the world’s total crude production. This also means that about 85% of the world’s crude oil is produced outside the United States. The U.S. could produce far more crude than it does, but the federal government has made it difficult to tap domestic resources, such as with moratoria on federal onshore and offshore oil drilling leases.

Oil companies have to negotiate rights to potential domestic oil resources on federal, state, and private lands through leases. Assessing federal leases can take between 3-4 years. And retrieving crude oil, which takes the work of engineers, skilled labor, and roughnecks (oil rig workers) who bring it to the surface, isn’t an easy or inexpensive endeavor.

Once found and produced, crude oil is sold to a refiner. Through refining, crude oil is manufactured into products like home heating oil, diesel, jet fuel, kerosene, and gasoline.

Some refiners are owned by the production companies, but more often, they are independent companies negotiating for the crude oil based on the forces of supply and demand on a global scale.

There are many grades of crude oil. Grades like West Texas Intermediate and Brent—two of the most prevalent—are often used as benchmarks to price other grades on a worldwide market.

The crude has to make its way via sea, road, train, or pipeline (the least expensive and most environmentally friendly way) to very large industrial plants that heat and compress oil to refine it safely and on a scale that boggles the imagination.

The United States has refining capacity of about 18 million barrels of oil per day. This is down more than 1 million barrels per day since the start of 2020. In the next few years, even more is scheduled to be taken offline, mostly to convert refining facilities over to biofuel production (biofuels are made from plants or biowaste).

Thanks to the COVID-19 pandemic; competitive pressures; and government regulations like the Renewable Fuel Standard, or RFS, which increases costs and limits consumer choices by mandating biofuels be blended into gasoline and diesel fuels, American refineries—one of our most productive, competitive, and critical manufacturers—are threatened due to bad government policy.

After the refinery, gasoline must then make its way to service stations via terminals and, usually, tanker trucks. Along the way, the biofuel ethanol is typically added to the blends to make finished gasoline and to comply with the RFS.

At the gas station, on average, more than 50 cents per gallon is added in the form of gasoline taxes.

Fuel retailing is one of the most competitive price markets in the world, with prices proclaimed on giant signs at street corners coast to coast. For these retailers, margins are incredibly small compared to profits on items sold inside the store.

In general, many gas stations are small businesses—more than 60% are owned by individuals or families who own only one station. Fewer than 5% of stations are owned by refiners. The name brand signs are typically the result of marketing arrangements between gas station owners and oil companies.

Many people work hard to find, produce, refine, and distribute some 800 million gallons of petroleum products every day.

In its journey from deep in the earth to the cars of Americans, these molecules can travel thousands of miles and encounter obstacles from man and nature alike. Policymakers should appreciate all of this and remove the barriers that limit supply.

Increasing supply by allowing more leasing on government lands, allowing investment (instead of talking down the oil industry or even making it more difficult to invest in the industry), improving efficiency by increasing pipeline capacity, and reducing regulations like the RFS will help to mitigate high gas prices for the American people.

How Government Restrictions on Domestic Drilling Drive up Gas Prices