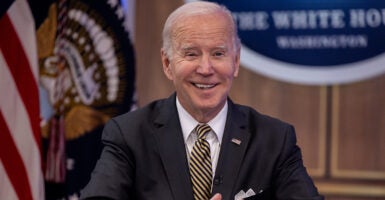 Until President Joe Biden, there had been at least one offshore lease sale every year since 1959, back in the early days of offshore energy production. (Photo: Nathan Posner/Anadolu Agency/Getty Images)

Americans know all too well that soaring energy prices have raised costs throughout the economy. What isn’t as obvious is that the Biden administration knows it is blocking solutions that could decrease those costs.

Such an embarrassing admission likely won’t come in President Joe Biden’s next press conference. But it can be found buried in a 500-page report by the president’s Department of the Interior, sufficiently out of sight of Americans demanding answers from leaders.

The Interior Department recently closed the comment period for its 2023-2028 National Outer Continental Shelf Oil and Gas Leasing Proposed Program. The lease plan should have been done and agreed upon before June, when the previous five-year plan expired. Yet here we are, nearly five months later, with only a draft plan to study.

The administration is required, by statute, to produce the plan, which stipulates the location and the maximum number of offshore lease sales the federal government will hold. Roughly 15% of U.S. oil production comes from offshore, and 2% of U.S. natural gas production.

Critical as the plan is, there is no surprise that the administration has slow-walked it. The Interior Department’s 2021 Report on the Federal Oil and Gas Leasing Program made clear that it has no interest in seeing oil and natural gas produced offshore (or on it, for that matter). That report called for fewer leases, higher royalty rates, and a more burdensome bidding process to screen buyers.

It took a federal court and legislation from Congress to force the Interior Department to hold just one offshore oil and gas lease sale in the last two years. Until Biden, there had been at least one offshore lease sale every year since 1959, back in the early days of offshore energy production.

Despite soaring energy costs, the administration refuses to rethink its agenda. This year’s Leasing Proposed Program puts forward a notion never before seriously contemplated by any president: an offshore oil and gas lease plan with zero lease sales.

Buried in the Interior Department’s 500-page analysis of the proposed plan is a clear admission that the administration knows this will prolong the energy crisis. The department acknowledges that allowing offshore lease sales would reduce the cost of oil and natural gas for Americans, writing: “New OCS [Outer Continental Shelf] oil and natural gas production … lowers the price consumers pay and producers receive.”

Using the Interior Department’s midrange scenario, oil prices would be expected to decrease by 73 cents per barrel and natural gas by 6 cents per thousand cubic feet. Cents add up quickly, especially when considering that oil and natural gas meet over 90% of Americans’ transportation fuel needs and 68% of Americans’ total energy needs for heat, power, and transportation.

The report further acknowledges that blocking Americans’ access to offshore oil and gas won’t usher in an “energy transition” to green energy technologies. Instead, over half of the shortfall in production would be filled by oil and gas imports. The rest would be met by increased onshore oil and gas production, alternatives like coal, and consumer belt-tightening.

The Biden administration justifies its proposal for zero leases over the next five years by citing climate change. (Never mind that “climate change” and greenhouse gas emissions mitigation are neither the goals nor the metrics that the Interior Department is required to consider in developing and implementing an offshore lease plan.)

But even this argument falls apart by the administration’s own analysis. In a zero-lease sale option, the Interior Department estimates that forgone energy would be met with energy replacements that would increase both greenhouse gas emissions and emissions of traditional air pollutants.

The Biden administration’s offshore lease plan rests solely on an arbitrary animus against oil and gas for being oil and gas. The administration all but admits as much, defending a plan with zero lease sales based on what it pridefully believes the nation’s energy needs should be, rather than what they are.

The administration’s Proposed Program blatantly abuses the purposes and definitions in the law governing offshore oil and gas lease sales. It has refused to follow the processes laid out by Congress. The question is: Will Congress do anything about it, or will it be content to let the energy pinch worsen?