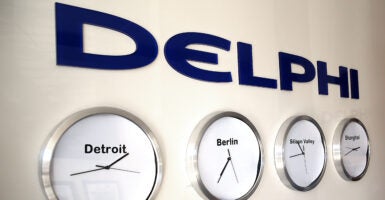 Congress is set to vote this week on HR 6929 to retroactively bail out the pensions of about 20,000 former Delphi auto-parts employees who had their pensions reduced beginning in 2009.

This proposed bailout, the Susan Muffley Act of 2022, is different in a number of ways from the recent no-strings-attached $97 billion bailout of about 250 select union pension plans, but it highlights the problem of lawmakers putting powerful unions above the law and requiring taxpayers to pay for their wrongdoing.

In March 2021, Congress passed the first-in-history taxpayer bailout of private union pension plans as part of the American Rescue Plan Act. Despite the Rescue Plan allegedly responding to COVID-19, this bailout had nothing to do with the pandemic.

Multiemployer pensions for unions had accumulated $757 billion in underfunding and were on track to pay only 42 cents on the dollar in promised benefits as of 2018—well before the pandemic began.

Those unfunded pension promises were the result of decades of reckless actions by union plans that have been allowed to operate under a separate set of toothless laws that failed to protect workers and retirees, and instead benefited union elites, who sold their members a bill of goods.

Now, taxpayers are paying the price, and the door has been opened to further bailouts.

The American Rescue Plan’s pension bailout is only the tip of the iceberg. In total, roughly 1,400 multiemployer pension plans have at least $757 billion in unfunded promises, and 96% of workers and retirees with multiemployer pensions are in plans that are less than 60% funded.

The American Rescue Plan union bailout is estimated to cover only 250 plans and $97 billion in broken promises. It’s only a matter of time before they all go broke, and as the Congressional Budget Office noted, even the majority of the plans receiving bailouts will become insolvent after 2051, when the bailout money dries up.

And there’s also an estimated $6 trillion to $8 trillion in unfunded state and local pension promises. If Congress forces taxpayers to bail out broken private sector promises, will they deny bailouts for broken public sector promises made to teachers and firefighters?

Naturally, the fact that taxpayers are being forced to guarantee 100% of some private unions’ broken promises raises questions as to why nonunionized workers’ pensions—including Delphi’s salaried employees—have been allowed to fail.

As of 2019, the Pension Benefit Guaranty Corporation was providing insurance benefits—often resulting in reduced pensions—to more than 800,000 retirees of failed nonunion plans, which includes about 20,000 of Delphi’s salaried retirees.

In response to President Joe Biden’s recent trip to Ohio, where he touted taxpayer bailouts of private union pensions, the chairman of the Delphi Salaried Retirees Association, Bruce Gump, said, “What we do have an objection to is to being constantly left out, just because we weren’t in the union.”

Gump went on to point out the inequity of selective bailouts and the administration’s unabashed union favoritism:

The unequal treatment of union and nonunion pensions is obvious, but the Delphi situation is unique.

Delphi was created in 1999 as an auto-parts manufacturing subsidiary of General Motors. As part of the spinoff, GM agreed to back Delphi’s unionized hourly workers’ pensions if Delphi were to go bankrupt.

Delphi did file for bankruptcy in 2005, and as part of the reorganization, GM agreed to transfer $3.4 billion of liabilities from the Delphi Hourly Employees Plan to the GM Hourly-Rate Employees Pension Plan.

In 2009, at the time of its own bankruptcy, GM had assumed $2.6 trillion of liabilities, but GM was relinquished from the remaining $800 million of pension liabilities it owed Delphi’s pension plans.

That shortfall, combined with other criteria, prompted an involuntary PBGC takeover of all six of Delphi’s pension plans effective July 31, 2009, resulting in benefit reductions for some workers based on the Pension Benefit Guaranty Corporation’s maximum-benefit guarantee of $54,000 per year for a 65-year-old worker in 2009.

The PBGC is a government entity that provides mandatory pension insurance through two separate programs for single-employer, nonunionized plans and multiemployer unionized plans.

If union plans were held to the same standards as single-employer plans, the overwhelming majority of unionized plans would have already been taken over.

New GM’s management—while being overseen by the Obama Administration—nonetheless agreed to spend $1 billion to supplement the pensions of Delphi’s [United Auto Workers] retirees. The nonunion employees were not so fortunate—GM did not supplement their pensions.

Had New GM treated Delphi’s UAW and nonunion employees equally, the Treasury could have paid $1 billion less for the bailout. Instead, some workers became more equal than others.

Sherk and Zywicki’s report on the auto bailout goes on to describe how the Obama administration also favored the UAW over other Delphi unionized employees.

For example, the deal negotiated by the administration did not bail out other unionized workers’ pensions, such as those of the International Union of Electrical Workers and United Steel Workers, and it specifically barred laid-off IUE workers from being transferred to UAW facilities.

A 2013 report from the Office of the Special Inspector General for the Troubled Asset Relief Program said, “One Auto Team official told SIGTARP that the strength of the negotiating parties was dictated by the leverage they held, but SIGTARP found that additional leverage was given [to unionized Delphi workers] by Treasury.”

Delphi’s salaried employees pursued 12 years of unsuccessful legal battles at the federal district and appellate court levels, based on arguments that their plan’s takeover violated the Fifth Amendment of the Constitution’s Due Process and Equal Protection Clauses, as well as the Employee Retirement Income Security Act.

In January, the Supreme Court declined to hear their case.

The auto bailout that was in reality a UAW bailout was wrong, and the recent bailout of select union pension plans without a single reform to correct what should be criminal activity is dead wrong.

Moreover, the unequal treatment of nonunionized Delphi employees relative to unionized employees was also wrong. But two wrongs—nor three, nor 300—make a right.

Instead of adding bailout upon bailout, policymakers should correct past wrongs by equalizing the rules of union and nonunion pensions and by treating unionized and nonunionized workers equally.

That should include having the PBGC take over unionized plans if they reach a point of no return to solvency, and it should include preventing any plans that receive taxpayer bailouts from promising any new benefits.