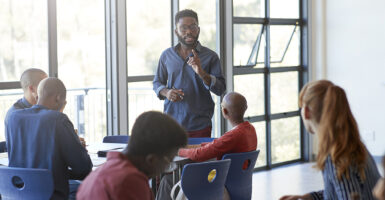 School districts across the country have established diversity, equity, and inclusion, or DEI, offices to reduce discrimination, and the federal Department of Education regularly touts the value of DEI programs to quell bias. Yet nationwide, school officials reported a “record number” of discrimination complaints last year.

How can this be?

In truth, studies show that DEI offices accomplish little more than producing a lot of bureaucratic sound and fury on the taxpayers’ dime.

Some of the complaints came from parents of children with special needs who reported that schools neglected their children during the pandemic. But that didn’t keep The New York Times from blaming conservative lawmakers who, the newspaper’s report asserted, “rolled back civil rights protections” by rejecting the bias and discrimination inherent in DEI programs inspired by critical race theory.

The number of complaints logged in 2022 (approximately 19,000) is some 19% higher than the then-record number reported in 2016—the year before former President Donald Trump took office. Yet DEI efforts were already well underway back then.

In 2015, the Education Department had released reports on how to “advance equity” and how to create more “equity” in preschools. In 2016, it reported on “promising practices” to advance diversity and inclusion in higher education and racial diversity among teachers.

The drive continues. Last year, the agency launched a new “equity action plan” that, among other things, celebrates the billions of dollars in taxpayer money being sent to schools as part of COVID-19 relief packages.

Yet despite the reports and new money, the racial problems in schools remain “astronomical,” according to federal officials. So why do they think we need more of the same DEI?

“Anti-racist” literature and equity projects want us to see racism in everything, making it harder to decide what actions are biased and deserve a response. If we accept the “astronomical” numbers are authentic, then—given the prevalence of DEI programs for many years—we have to question these programs’ value.

Research has already shown that diversity training programs have failed to improve attitudes and behaviors for years and attempts to reduce bias through measuring just how much of it each of us has stored away in the recesses of our minds have been a spectacular bust. Anthropology Now reports that “hundreds of studies dating back to the 1930s suggest that anti-bias training doesn’t reduce bias.”

More recent studies reviewing hundreds of surveys of bias-training participants finds “weak immediate effects on unconscious bias and weaker effects on implicit bias.” Consultants Rik Kirkland and Iris Bohnet at McKinsey & Co. wrote that after reviewing diversity research from all over the world, they “did not find a single study that found that diversity training in fact leads to more diversity.”

Still, school districts across the country are conducting DEI training and instruction—often mandatory—and implementing the programs emanating from Washington. And the Biden administration remains committed to digging and then refilling holes created by its DEI efforts.

State lawmakers should consider proposals that give parents veto power over these initiatives. Parents should be able to review school curriculum and student assignments. Only a few states offer parents a way to see what their children are being taught with the ability to create change when necessary, short of choosing another school.

State officials should also prohibit school leaders from forcing teachers or students to accept the idea that they are guilty of prejudice just because of their skin color. Nor should they be made to profess ideas such as “America is systemically racist” (a practice that is already prohibited by the Civil Rights Act of 1964).

Evidence on DEI programs’ effectiveness is not missing. The research demonstrates failure.

Teachers, parents, and students do not need lawmakers to reinforce these efforts. Rather, they should opt for something different—say, lessons on the shared American values of equality under the law, freedom, and opportunity.

This article originally appeared in The Washington Times