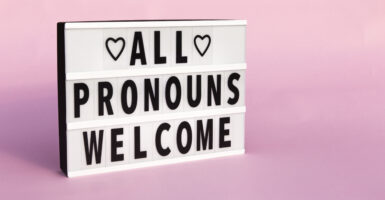 That’s what a Wall Street Journal report on a Freedom of Information Act request revealed Dec. 30. The information gathered comes from 2021.

At this point, it’s difficult to be surprised by the findings, but it’s still notable. When someone says “trust the experts” in government, just think of the following:

“The Department of Veterans Affairs has a gender gingerbread person,” the Journal’s editorial board wrote. “NASA says beware of micro-inequities. And if U.S. Army servicewomen express ‘discomfort showering with a female who has male genitalia,’ what’s the brass’s reply? Talk to your commanding officer, but toughen up.”

The report highlights how the cult of diversity, equity, and inclusion has been established and codified in our federal government during President Joe Biden’s tenure. One of Biden’s early efforts was a DEI executive order to establish a “government-wide initiative to advance diversity, equity, inclusion, and accessibility in all parts of the federal workforce.”

The agencies jumped into action.

Unlike under Republican administrations, when bureaucrats refuse to comply with even the simplest demands of the apostate executive, the bureaucracy springs into action for Democratic presidents of the true faith.

What’s striking is that even the most serious parts of our federal government, like the Department of Homeland Security, NASA, and the military, now have programs to comply with this “great awokening.”

“The U.S. Army offered three modules on transgender policy, one for ‘Commanders at all levels,’ another for ‘Special Staff,’ and a third for ‘Units and Soldiers.’” the Journal reported. “Notable is a series of vignettes that cover pronoun usage, urinalysis observation, and a serviceman who wants ‘to discuss his newly confirmed pregnancy.’”

This is the kind of nonsense that even our military now devotes time to.

The Department of Veteran Affairs really does use a gender gingerbread person in a training program about managing gender diversity. There’s more, per the Journal:

The VA’s “Managing Gender Diversity” training has sections on pronouns and embracing “gender-expansiveness.” One slide lists terms, including “gender fluid” and “pansexual,” while instructing: “List your personal ‘biases’ in the BIAS box.” A game of “PRIVILEGE BINGO” includes such items as “NO CRIMINAL RECORD,” “MILITARY EXPERIENCE,” and “MARRIED.”

Remember when people thought all the college campus “microaggressions” nonsense would stop when kids grew up and got a real job? Well, they got real jobs in business and government, and are using their power to ensure that every aspect of our society reflects their warped ethos.

NASA literally has a tipsheet devoted to microaggressions.

Here are some examples: “‘Asking an Asian person to help with a math or science problem,’ as well as saying, ‘America is a melting pot.’ A slide deck on inclusive language suggests nixing ‘the poor’ and substituting ‘people dealing with economic hardship.’”

Stargazing has been replaced by navel-gazing at NASA, it seems.

No wonder Elon Musk’s SpaceX is making most of the interesting advancements in space exploration these days.

The lesson from this trove of absurdities, the Journal’s editorial board noted, “is that there is now a conveyor belt from academia to the diversity-industrial complex. The portmanteau ‘misogynoir’ was coined in 2010 on a blog called Crunk Feminist Collective. Eleven years later it’s in a training (sic) for government workers.”

This investigation brings up a serious question for America in 2023. Are we so rich, so powerful, and so secure in our position in the world that we can devote a large share of our resources—economic, financial, and human—to this nonsense?

Our government now operates more like a secular theocracy, with an emphasis on rooting out heresy and reinforcing its ideology in every way, large and small. Again, how long can we get away with this? Saying “diversity is our strength” over and over again doesn’t make it so.

The United States, by geography, by government tradition, and by the culture of a great people went from a small group of sparsely populated colonies on the edge of civilization to the world’s first global superpower in just a few centuries. We’ve amassed almost unfathomable wealth for a vast middle class. Our accomplishments in the 20th century alone are staggering and place us at the pinnacle of the world’s greatest civilizations.

Imagine if things had been reversed, if all the men whose statues activists and our modern institutions tore down and melted down were replaced by the new man—or “womyn” or whatever—of today raised in a culture of grievance and coddled minds. The privilege of our country’s past success has afforded us the luxury to obsess over privilege.

This can’t last forever, though. Even in just the past few years, as vast parts of our society became comfortable with mediocrity, and as our economy groans under the weight of debt and inflation, the cracks have begun to show.

Perhaps this is a sign that we will slip into a new dark age of our own making, where hard times are made by weak men. Then again, maybe the overwhelming and uncompromising nature of this threat will further spark opposition by Americans who see this movement for what it is and know that the hour is late to save the republic.