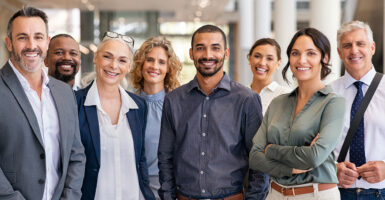 Everywhere from business to academia is emphasizing racial, ethnic, and gender diversity. But are we really focusing on what creates true diversity? (Photo: Ridofranz, iStock/Getty Images)

Patrice Onwuka is adjunct senior fellow for Philanthropy Roundtable and director of the Center for Economic Opportunity at Independent Women’s Forum.

Diversity emphases are popping up everywhere from business to academia. One of the top business schools in the country, Wharton, is going to offer a diversity major for students. The Wall Street Journal is reporting more companies are trying new tactics to add greater diversity to their supply chains. As a black woman who immigrated to America, while I celebrate the vast array of backgrounds that can add to our culture and economy, I wonder if we are really focusing on true diversity.

On paper, I might fit a gender and race diversity goal that some are seeking to emphasize, but in reality, I don’t fit neatly into anyone’s boxes.

I’m a former subject of the British monarchy and have been a proud naturalized U.S. citizen since I was a teenager. I am also a wife of six years, a mother of three boys, and a Christian who attends a nondenominational church each week. I was elected the Republican committeewoman for my ward in Boston several years ago. I am now a dot of red in my very blue Maryland county. Those identities hardly scratch the surface of who I am.

Each person brings a kaleidoscope of experiences and characteristics that inform who they are, what they believe and value, and how they live their life. We are all unique individuals, and there is so much more to us than what can be seen on the outside or defined by the demographic boxes of gender and race that we so often fill out on forms for work, school, or government agencies.

One would expect that any effort to promote diversity would take this complexity into consideration.

Yet, so many diversity, equity, and inclusion—also known as DEI—efforts in corporate, nonprofit, and government settings today tend to prioritize gender and race in a way that leaves no room for the other facets individuals bring to the table.

While the intent of these efforts is to give an advantage to someone who looks like me, I reject the assumption that I am too weak to compete on merit alone, I oppose being reduced to my immutable characteristics, and I don’t desire to be a victim of tokenism. In addition, some diversity efforts can unintentionally spur racial animosity that undermines the goal of workplace or societal unity.

Like many, I have been frustrated by efforts focused on reducing racial disparities in America that minimize the role of the individual and dismiss the impact of personal choices on an individual’s outcomes.

Remedies meant to correct disparities may be well-intended but are ineffective at best. The real solution comes from an evolution away from box-checking, quotas, and assumptions based on physical traits to a celebration of the wide range of identities and characteristics that make each person special.

For example, some of my friends told me I was the first black female conservative they had ever met. Yet when I describe my views on the importance of charity, a strong family, and educational choices for kids, we quickly find areas of agreement. Optimism for the future and a strong sense of personal agency and responsibility are common values I share not only with these friends but with others I know from poor, white communities and immigrant families alike.

On a larger scale, one effort to increase diversity that has not had the expected impact is that of increasing female representation on boards of directors. Many rigorous peer-reviewed studies of companies in the U.S. and abroad find no causal link between board gender diversity and corporate performance.

Even if headcounts are the measure of success, the needle has not moved much even after decades of attempts to increase racial diversity in corporations and management. Corporate DEI trainings have, at best, no impact and, at worst, negative impacts if the training is compulsory.

Some propose taking data-driven approaches to combat the lack of minority representation in the workplace. Others would overhaul DEI training to refocus on outcomes rather than focusing on checking boxes when it comes to hiring. Philanthropy Roundtable’s True Diversity initiative is encouraging the charitable sector—donors and nonprofits alike—to move beyond fulfilling quotas as the end goal and instead pursuing a holistic, equality-based approach to diversity as a means of more effectively serving communities and those in need.

True Diversity values each individual for the experiences that shape him or her rather than categorizing a person by physical traits. It challenges organizations to build cultures that embrace viewpoint diversity: Consider a person’s religion, worldview, values, knowledge, and socioeconomic background rather than just membership in a particular demographic group.

True Diversity can also enrich the decision-making process even as it forces tough conversations. It creates space for individuals to bring their varied knowledge and lived experiences to bear. It is the antidote to quotas. Instead of forcing an ideal of diversity based on physical traits, it values differences, whether physical, experiential, or cultural.

In the charitable sector, this is particularly key as local issues need local solutions. When we allow organizations to harness the power of all the facets that make each of us human, they can identify what types of diversity in leadership and staffing will best support their missions and strengthen their communities. Freeing donors and nonprofits from arbitrary standards and expectations to allow them to focus their attention on getting the job done the best way possible helps uplift those being served.

Whatever the approach, the time is now to shift away from those who treat demographic diversity as the Holy Grail. Our lived experiences and values are the true diversity this moment calls for.